Every election season brings a new crop of political hopefuls from the radical right. So far this year, their win-loss record is a respectable 1-1.

Black voters in Lake Wales, Fla., are claiming they were “snookered” into voting for John Paul Rogers, the former Florida grand dragon, or state leader, of the United Klans of America (UKA), who was sworn in as Lake Wales city commissioner May 6. “We were caught asleep at the switch on this thing,” black civic leader Clinton Horne told The Ledger, a regional daily paper.

Though he refused to answer any questions from The Ledger concerning his past Klan activities, Rogers pledged to treat blacks fairly. “I don’t let my personal views interfere with the basics,” he said.

Rogers, 66, told Florida law enforcement investigators in 2005 that he joined the Klan in 1963 or 1964, rising to become the Florida state leader of the UKA, a post he occupied until 1988. That year, the Southern Poverty Law Center bankrupted the group by winning a $7 million judgment for the family of Michael Donald, a 19-year-old black man who was murdered by Klansmen in 1981. The UKA disbanded as a result.

It’s not clear what Rogers’ current racial attitudes are. A few years ago, the former Klan chieftain served as the campaign manager for Booker Young — a black civic activist — in Young’s unsuccessful bid for city commissioner. This year, Young returned the favor by campaigning door-to-door with Rogers in northwest Lake Wales, which is predominantly black. 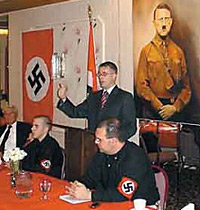 Less surprising were the results of the May 6 Republican primary in Indiana’s 2nd Congressional District, in which Crown Point, Ind., lawyer Tony Zirkle (right,speaking) finished a distant third with 16% of the vote after openly pandering to uniformed neo-Nazis.

Zirkle was a special guest speaker at an April 20 birthday party for Adolf Hitler hosted in Chicago by the American National Socialist Workers Party (ANSWP), a particularly guttural hate group led by neo-Nazi threatmaker Bill White. Despite the presence of large swastika banners, a looming portrait of Hitler, and uniformed neo-Nazis with swastika armbands at the the small table from which he delivered his speech, Zirkle told the Michigan City (Ind.) News-Dispatch that he didn’t know the party was necessarily a neo-Nazi gathering. Swastika flags and brown shirts notwithstanding, the Indiana lawyer claimed with a straight face that he didn’t “know enough about the group to either favor it or oppose it.”

Zirkle, who pledged to slay what he calls “The Great Porn Dragon” if elected, also claimed he’d been invited to talk to the audience of uniformed neo-Nazis about the effects of pornography and prostitution on young white women and girls. ANSWP, he explained, “was interested in the targeting of white people for prostitution” and agreed with him that trafficking of “young white women should be stopped.” Speaking to ANSWP, he added, was “just a great opportunity for me to witness,” a reference to what he described as his “Christian” beliefs. Added the eager-to-please Zirkle not long before his loss: “If the Black Panthers or the Jewish Zionists want me to speak about these issues, I’ll do it.” His offer was left on the table.