This spring, a high-society New York magazine called Quest ran a short feature about Emilia Fanjul, the wife of sugar baron Jose “Pepe” Fanjul, and her remarkable efforts to help black and migrant worker children out of poverty. The story described how Fanjul, a major philanthropist, was helping to finance and build a sparkling new campus for Glades Academy, a charter school in the town of Pahokee, Fla., which suffers with a 32% poverty rate. “I call them the forgotten children,” Fanjul said. “My greatest wish is that they gain dignity and hope.”

At the end of the article, Quest added a practical note: “For more information about Glades Academy, call Chloe Black.” A telephone number followed. 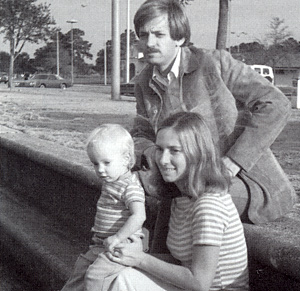 What the magazine didn’t say — and, doubtless, didn’t know — was that Chloe Hardin Black (above, with David Duke, in a 1976 photo from Tyler Bridges' The Rise of David Duke) is a long-time white supremacist and the wife of a notorious former Klan leader. Black’s husband is Don Black, a former Alabama Klan chieftain who is famous among white supremacists for his creation of Stormfront, the largest white supremacist Web forum in the world. Prior to Black, Chloe Hardin was married to Black’s former boss, neo-Nazi David Duke, who was the national leader of the Knights of the Ku Klux Klan in the 1970s.

There is no evidence that Emilia Fanjul, who married decades ago into what the Palm Beach Post has described as the country’s best-known and wealthiest Cuban-American family, or other family members had any inkling as to Chloe Black’s background.

Black, who lives in West Palm Beach just a few miles from the Fanjuls’ Palm Beach mansion, also works as an “executive assistant” in the executive suite of Florida Crystals, where the Fanjul family’s sugar conglomerate is headquartered. The Intelligence Report contacted Gaston Cantens, vice president of corporate relations at Florida Crystals, for comment, but a day later none was forthcoming. Similarly, many calls to Chloe Black’s work, home and cell phones went unanswered.

The irony of Chloe Black doing public relations work for a school explicitly aimed at lifting black and Latino children out of poverty is hard to miss. While less visible in the white supremacist world than either of her husbands, Black has a strong movement history of her own. She met Duke at a college meeting of the White Youth Alliance in the 1970s, and, after marrying him, became vice president of his Knights of the Ku Klux Klan. She long held the copyright to African Atto, a weird 1973 booklet that instructs blacks on how to kill whites — and which was written, as was revealed by enterprising reporters, by Duke, who then claimed he was using it to compile a list of “radical blacks.” Although Chloe divorced Duke in 1984, four years later she married Don Black — a man who had only recently emerged from prison after serving time for plotting to invade a black-run Caribbean island.

Don Black has grown into a central figure on the white supremacist scene since putting up the first major hate site on the Internet in March 1995, just a month before the Oklahoma City bombing. In recent years, Black has built Stormfront into a huge forum for so-called “white nationalists” that now claims more than 133,000 members (although only about 20,000 are believed to be active). It offers scores of busy discussion threads on topics ranging from white dating to ideology to race “science.” The site even has 15 forums dedicated to the movement in other countries, many of them in foreign languages. Overall, Stormfront has become the premier site for white supremacists in the world, and as such is very expensive to run.

But Don Black — who lives and operates Stormfront out of a house owned entirely by Chloe and valued at about half a million dollars — is apparently unemployed, although he claims to do some Internet consulting work. He solicits contributions to the Stormfront site, but says he draws no salary from the operation and has, according to an official Stormfront posting, “financed much of Stormfront’s growth out of pocket, personally.” The website is believed to be at least partly supported by the salary that Florida Crystals pays Chloe Black.

Chloe Black’s “pro-white” activism did not end in the 1970s. In recent years, she has attended biannual conferences of American Renaissance magazine, a racist organization known for publishing pseudo-scientific tracts purporting to show that black people are less intelligent and suffer from more “psychopathologies” than others. She and her husband continue to socialize with Duke, who fathered her two daughters, and even years after her divorce from Duke, she was still lauding him as “the Jesse Jackson of white rights in America.” In 2007, both Blacks were in the news after it came to light that Don had donated money to the Ron Paul presidential campaign. And just this June, Chloe and Don Black attended a major “leadership conference” of the Council of Conservative Citizens, a white supremacist group that has described black people as “a retrograde species of humanity.”

The Fanjul family long dominated Cuba’s sugar industry, but left after the 1959 Cuban revolution and rebuilt their business in Palm Beach County. Today, four brothers — Jose, Alfonso, Andres and Alexander — run the family firm, Flo-Sun, from the same building where Chloe Black works. The raw sugar producer has more than 400,000 acres of cane in Florida and the Dominican Republic and some 25,000 employees in subsidiaries including Florida Crystals, C&H, and Domino, according to the Palm Beach Post.

Emilia and Jose Fanjul are famous in high-society circles, in part because of Emilia’s tireless charity work — including starting the Glades Academy seven years ago and continuing to serve as its chair — and major philanthropic gifts from both her and others in the extended Fanjul family. The couple regularly moves between their Palm Beach mansion, New York City, and a 7,000-acre resort home in the Dominican Republic.

For his part, Don Black seems to know the Dominican Republic well. In a 2006 posting to Stormfront, the former Klan leader described the Caribbean island nation as “a Third World cesspool, but [one that] still contains well-protected resorts which are playgrounds for the European and American rich and famous.”