Lou Dobbs, the CNN host who has been frequently criticized for turning his program, “Lou Dobbs Tonight,” into a forum for anti-immigrant extremists, is at it again. In the past few months, Dobbs has aired six different reports featuring anti-immigrant activist Rick Oltman of Californians for Population Stabilization (CAPS). The reports, all narrated by CNN correspondent Casey Wian, primarily discussed California’s budget woes, with Oltman blaming them on undocumented workers.

If Wian had conducted a simple Web search for Oltman, he would have dug up a laundry list of Oltman’s extremist activities. For example, Wian would have quickly found out that in 1998, Oltman, who was then the western regional representative for the Federation for American Immigration Reform (FAIR), traveled to Cullman, Ala., for a protest against a swelling local population of Mexican workers. The event was put on by the white supremacist Council of Conservative Citizens (CCC), which “oppose[s] all efforts to mix the races of mankind,” and featured an unrobed Klansman burning a Mexican flag. In the CCC’s ad for the event, Oltman was described as a member of that group. There also is a photograph that has been available on the Web since last year of Oltman participating in a 1997 CCC conference panel entitled, “Immigration: Are We Being Overrun?,” which ran in the group’s in-house publication, Citizens Informer. 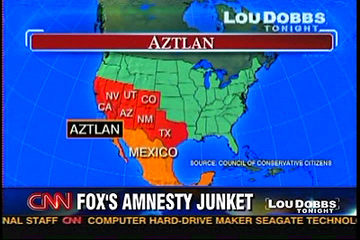 Wian can’t claim ignorance of the CCC. In 2006, during a report that Wian was narrating on “Lou Dobbs Tonight” about a state visit by Mexico’s then-president Vicente Fox, a graphic appeared of “Aztlan,” the southwestern portion of the current United States that conspiracy theorists claim Mexico is secretly plotting to “reconquer” with the aid of “invading” Mexican immigrants. Wian joked as the image was aired: “You could call this the Vicente Fox Aztlan tour, since the three states he’ll visit — Utah, Washington, and California — are all part of some radical group’s vision of the mythical indigenous homeland.” CNN’s accompanying full-screen map depicting “Aztlan” was prominently sourced to the CCC, causing widespread criticism of Dobbs for relying on hate group material. A spokesman for Dobbs went on the record shortly afterward saying that the producer who had found and used the hate group map was “disciplined” as a result.

If Wian had searched further into CAPS and Oltman, he would also have found that the group Oltman now works for, CAPS, received funding in 2002 from the race science outfit the Pioneer Fund. Set up in 1937 to “improve the character of the American people” by promoting the study of eugenics and the procreation of descendants of the original white colonial stock, Pioneer has funded many of the leading Anglo-American race scientists of the last several decades. Pioneer also has funded a few other anti-immigration groups besides CAPS, furnishing FAIR more than $1.2 million between 1985 and 1994, and giving ProjectUSA, a group known for putting up anti-immigrant billboards in New York City and run by Craig Nelsen, $10,000 in 2002.

Wian might even have figured out that CAPS has worked closely with other hate groups. Last October, CAPS and the Social Contract Press, listed as a hate group by the Southern Poverty Law Center, co-hosted a press conference at the National Press Club on “How Many Illegal Aliens are in the U.S.?” CAPS President Diana Hull shared the stage with Wayne Lutton, who edits the press’ journal The Social Contract. Few members of the radical right have a longer hate resume than Lutton, who has been published in the Holocaust-denying Journal of Historical Review, served as an editorial board member for the CCC’s Citizens Informer, and co-wrote an anti-immigrant screed, The Immigration Invasion, that has been seized as hate material in Canada. Under Lutton’s purview, The Social Contract has published dozens of white nationalists and put out a special issue that was entitled “Europhobia: The Hostility Toward European-Descended Americans.” The lead article argued that “multiculturalism” was replacing “successful Euro-American culture” with “dysfunctional Third World cultures.”

Other popular anti-immigration folks featured on Dobbs’ show in the last year include Dan Stein and Ira Mehlman of FAIR, which the Southern Poverty Law Center began listing as a hate group in 2007 and whose founder, John Tanton, has spoken of a “Latin onslaught” and questioned the “educability” of Latino immigrants. Dobbs has also featured officials from the Center for Immigration Studies, an organization that describes itself as “an independent, non-partisan, non-profit research organization,” but which is an anti-immigration group originally conceived of by Tanton and founded as part of FAIR. CIS awarded Dobbs its 2004 Eugene Katz Award for Excellence in the Coverage of Immigration.