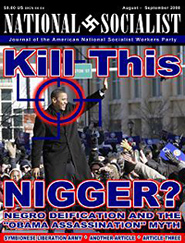 Neo-Nazi boss Bill White, long given to swaggering threats and proposals for violence, this week went even further than normal — announcing plans for a magazine cover headlined “Kill This N-----?” with a photo of Barack Obama and, two days later, publishing the home address of a juror who helped convict another neo-Nazi leader in a federal conspiracy case.

White, who heads the Virginia-based American National Socialist Workers Party, has issued a series of Internet calls for violence in recent years, including his infamous September 2007 suggestion that followers “Lynch the Jena 6,” a reference to black high school students in Jena, La. But of late, his postings have become even more violent, possibly as a result of White’s deliberate attempts to be provocative in the face of waning public attention.

On Tuesday, White posted on his Overthrow.com website a request for money to pay for a special issue of his National Socialist magazine. The mocked-up cover, with a huge “Kill This N-----?” headline, shows Obama speaking to a crowd with a rifle’s crosshairs superimposed on his head. White said that the accompanying article would explain the Democratic presidential nominee’s “radical Communist politics and Jewish backers … and how he plans genocide against white working people.”

Then, on Thursday, White posted the name, home address and several phone numbers for an allegedly “Gay Jewish anti-racist” juror who helped convict Matt Hale, then-leader of the neo-Nazi World Church of the Creator, of soliciting the murder of a federal judge. Hale was sentenced in 2005 to 40 years in prison.

White does not directly propose violence against the juror. But he told his readers that the man “played a leading role in inciting both the conviction and the harsh sentence that followed.” He also described the conviction as wrongful and said that the prison term handed Hale was a “criminally long sentence.”

White, who lives in Roanoke, Va., has a long history of issuing sneering threats and vulgar, racist attacks. Earlier this summer, on July 22, he verbally attacked what he called “‘respectable’ n------” in the NAACP and elsewhere in American society. “I am convinced, more and more each day, that the only solution to this problem is to kill all of the n------ involved, preferably with state sponsorship,” he wrote. “When the death squads come, line me up as volunteer number one.”