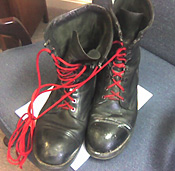 BRANDENBURG, Ky. — A jury got a look today at the weapon that was used in a Ku Klux Klan assault on a 16-year-old boy: a pair of steel-toed black boots with bright red laces.

The boots played a key role in testimony during the first day of the civil trial against the leader of the Imperial Klans of America (IKA), one of the nation’s largest Klan organizations with 16 chapters in eight states. The Southern Poverty Law Center filed a civil lawsuit against IKA leader Ron Edwards, contending that members of his group assaulted and severely injured Jordan Gruver in July 2006 at a county fair in Brandenburg, about 40 miles southwest of Louisville.

Gruver, a U.S.-born citizen of Panamanian descent, was attacked because the Klansmen wrongly assumed he was “an illegal s---.” By suing Edwards and Jarred Hensley — a Klansman who pleaded guilty to attacking Gruver — the SPLC hopes to win damages large enough to shut down one of America’s most dangerous Klan groups.

Today, the SPLC began making its case before a jury at the Meade County Courthouse in Brandenburg. The boots with red laces were introduced into evidence during the testimony of Joe Greer, a detective for the Meade County District Attorney’s Office who investigated the assault on Gruver. Greer used a magnet to demonstrate how he confirmed that the boots had steel toes. He also testified that they were the boots Hensley had on the night he and another Klansman kicked Gruver after knocking him to the ground.

SPLC lead trial attorney Morris Dees returned to the boots during his questioning of Edwards, who runs the IKA from his 15-acre compound in Dawson Springs, Ky. Dees got Edwards to admit that steel-toed boots are "the weapon of choice" for skinheads, which Edwards welcomed into his group despite knowing of their propensity for violence.

“What’s the significance of the red laces?” Dees asked.

“That means someone shed blood for their race.” Edwards replied.

Edwards, who spent about 2½ hours on the stand today, sports several tattoos on his shaven head that were visible in the courtroom, including “F--- S.P.L.C.,” “Death to ZOG [Zionist-occupied government]” and “Aryan Justice.” Hensley also has numerous tattoos, including the word "violence" on his knuckles, "murder" below his neck, and a swastika on his arm.

Several supporters of Edwards and Hensley attended the trial, sometimes snickering during testimony. Some of them wore skinhead-style attire, including combat boots, red braces (suspenders), and white power emblems on their jackets.

During his opening statement and examination of Edwards, Dees painted a compelling picture of the Klan leader as a man motivated by money as much as by hate. Edwards admitted under oath that he appropriated money from IKA dues and merchandise sales for his own use. "The only rule he has is to make money for Ron Edwards," Dees said.

Dees said Edwards required the Klansmen to recruit new members, yet failed to provide adequate supervision. "They were doing exactly what Ron Edwards had programmed them to do, exactly what he had directed them to do — and that is going out and recruiting members," he said.

Edwards maintained that he obeys the law, even while serving as leader of the IKA. "I'm going to prove that I teach them not to go out and commit violence," he said. "And I'll also show that I did not even know they were there."

Yet Dees later played a clipping from a National Geographic documentary in which Edwards said the opposite. "We can be very violent and we can be very deceptive, and we will do whatever we have to do to survive."

The trial, which is being covered by several major media outlets, will continue tomorrow with Dees’ further questioning of Edwards.