BRANDENBURG, Ky. — In dramatic testimony today, a former white supremacist told the court that the head of the Imperial Klans of America (IKA) instructed him to assassinate Southern Poverty Law Center founder Morris Dees (below). 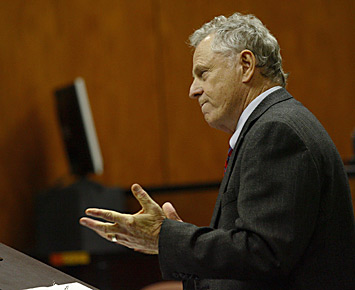 "[IKA leader] Mr. [Ron] Edwards is a very dangerous man to me," said Kale Kelly, who was once a trusted member of Edwards’s inner circle. "He promotes violence and hatred [toward] anybody who he feels threatens him: minorities, Jews, blacks. I've lived with him. I know this."

Kelly's testimony, which came during the second day of SPLC's trial against Edwards, struck a blow to the heart of the Klan leader's defense: That he does not encourage his members to commit violent acts. It also contradicted Edwards' earlier testimony that he never told Kale to kill anyone.

The SPLC sued Edwards of Dawson Springs, Ky., in civil court, contending that members of his Klan group attacked and severely injured a 16-year-old boy of Panamanian descent because they mistakenly thought he was "an illegal s---." Also named as a defendant was Jarred Hensley of Cincinnati, who served two years in state prison for assaulting Gruver at a county fair in northwest Kentucky. The SPLC hopes to win damages large enough to shut down the IKA, one of the largest Klan groups in America.

Kelly testified that he met privately with Edwards late one night in the guard shack outside Edwards' former home in tiny Powderly, Ky. Edwards bestowed on him the rank of lieutenant in a secret cell whose mission was to injure and kill blacks, Jews, people of mixed race, and anyone who opposed Edwards. The Klan leader showed Kelly a photograph of several people in camouflage, one of them with a circle drawn around his head. "He told me to take care of this individual … by any means, to kill him," Kelly testified.

Then Edwards showed Kelly a slip of paper with a name on it: "Morris Dees." Edwards wanted Dees dead because of the SPLC's lawsuit against the Aryan Nations, an Idaho-based neo-Nazi group. After instructing Kelly to assassinate Dees, Edwards burned the paper in a candle flame.

To carry out the plot, Kelly intended to track Dees in Idaho, while Edwards was to supply the weapon. But in April 1999, within days of his planned departure, the plot was thwarted by an FBI informant who had infiltrated the Aryan Nations. Kelly served time in federal prison on weapons charges; Edwards was never charged in connection with his role in the plot.

Kelly, now married and employed, broke down as he told the jury that he was a changed man.

Joshua Cowles, a former IKA member, also testified that Edwards asked him to use violence. As a new recruit, he was ordered to beat up a man who had an IKA tattoo that Edwards wanted covered up.

Cowles said that Edwards spent money on himself that had been intended for his organization. For instance, when the IKA received over $400 earmarked for Hensley's legal defense in a criminal case, Edwards instead used most of the money to pay his bills.

"The IKA is about one man and one man only — and that’s Ron Edwards. It's about his greed, his want to have money, his desire to get by without working, his desire to trick people into giving him money to support him," he said.

Because of that greed, Edwards encourages his Klansman to recruit aggressively, according to testimony from Cowles and former IKA "Acting Exalted Cyclops" Matthew Roberts. Moreover, Roberts testified that business cards with Klan contact information — the same ones Klansmen distributed at the Meade County Fairgrounds the night they assaulted Gruver — were kept in the guardhouse office at the IKA compound. Edwards had claimed during his earlier testimony that he'd never seen the cards. Roberts said the men thought the fair would be fertile recruiting turf for the Klan because, he said, Brandenburg "is a redneck town." 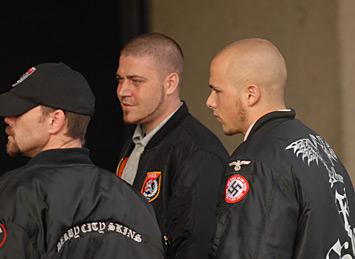 Spectators today included Supreme White Alliance members and a man in full camouflage uniform with an IKA patch. Several other men in fatigues with black berets sat near the entrance to the Meade County Courthouse, where security has been beefed up for the trial. Also outside the courthouse, Edwards' son, Steven Edwards, conferred with his father. Steven Edwards leads the Supreme White Alliance (SWA), a racist skinhead group. Hensley is now the second-highest ranking member of SWA, which was in the news recently when a former member was one of two men charged in connection with a plot against president-elect Barack Obama.

Tomorrow, Jordan Gruver, the teenager assaulted by Klansmen, will testify about his injuries.

Photo of Morris Dees by Bill Luster © The Courier-Journal