Glenn Spencer, who heads the hate groups American Patrol and American Border Patrol, loves showing off the high-tech gizmos he uses to track “illegal aliens.” Last April, Spencer set up remote control Internet cameras controlled from his home along the Mexican border in southeastern Arizona — “Operation Virtual Vigilance,” in the paramilitary parlance Spencer favors. At the time, he promised he would start sending unmanned aerial drones into the air to monitor border fence construction.

On Thursday, Spencer will trot out the results of his drone project, or what he calls Operation B.E.E.F. (Border Enforcement Evaluation First), at the National Press Club in Washington, D.C. On his website, he says he’s been sending a drone up every two months along a route stretching “from Texas to the Pacific Ocean, documenting the construction of the border fence.”

Glenn Spencer is no stranger to Hatewatch. For years, he’s peddled a racist conspiracy theory that suggests that the Mexican government is purposely sending undocumented immigrants northward in order to “reconquer” the American Southwest and, ultimately, transform it into a northern Mexican state to be called Aztlan. But in recent months, Spencer has expanded from his usual angry attacks on Latinos to furious, explicitly racist and anti-Semitic tirades that have caught the attention of many longtime Spencer observers. Consider:

• Just before Christmas, Spencer issued a nearly hysterical Web posting entitled “Obama Threatens Nation,” in which he described the incoming Obama Administration as “prepared to make a frontal assault on the sovereignty of the United States.” In fact, he said, “Barack Obama represents the greatest threat to the United States of America since the Civil War. Brainwashed Americans have just voted to commit national suicide.”
• The same month, Spencer wrote an article on his website with another provocative title: “Is Jew-Controlled Hollywood Brainwashing Americans?” In it, he assured readers that he had Jewish friends but added: “I fear, however, that this small handful of patriotic Americans are far outnumbered by liberal Jews who now have total control over our media.” He linked his posting to a report by well-known anti-Semitic theorist Kevin MacDonald, who Spencer has hosted as a guest on his radio show and whose work he recommends.
• Last fall, Spencer lamented the falling birthrate for whites and contrasted that to soaring Latino birth rates. The title of his posting (which was accompanied by the cartoon below): “White America Commits Suicide: The Coming Disunited States of America.” 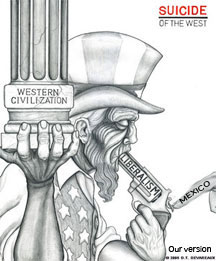 It’s not like Spencer has been seen as calm and rational in the past. In fact, some of his neighbors and former allies have long been saying he’s out of control. In 2003, he was charged with four felonies after firing his .357 Magnum pistol into a neighbor’s garage because, he told police, he had heard noises that frightened him (later that year, the charges were reduced to a misdemeanor and a $2,500 fine). In 2002, Francis Williams, a director of Spencer’s own American Border Patrol, resigned, describing Spencer as “borderline xenophobic.”

That was hardly a revelation to many who knew Spencer. In a 1996 letter to the Los Angeles Times, Spencer wrote that “Mexican culture is based on deceit” and that “Chicanos and Mexicanos lie as a means of survival.” In 1998, he spoke in Cullman, Ala., at anti-immigrant rally hosted by the Council of Conservative Citizens, a racist group that has called blacks “a retrograde species of humanity.” In 2001, he had Betina McCann, then fiancé of neo-Nazi Steven Barry, hand-deliver copies of his film “Bonds of Our Nation” to every member of Congress (the video largely rehashes his Aztlan conspiracy theory).

None of this has stopped Spencer from being featured in mainstream media venues. He’s appeared twice in recent years on CNN’s “Lou Dobbs Tonight” and last year he debuted his video, “Border Truth USA,” at a three-day American Legion conference on illegal immigration (the Legion had earlier issued a report on illegal immigration rife with falsehoods and defamatory statements). Spencer’s American Patrol (also known as Voice of Citizens Together) has also received at least $11,000 in grants (pdf) since 1994 from the Federation for American Immigration Reform (FAIR), a major nativist group that has angrily rejected the label of "hate group" applied by the Southern Poverty Law Center.