This afternoon in Maricopa County, Ariz., more than 200 Latino immigrants were chained, dressed in prison stripes and forced to march down a public street from a county jail to a detainment camp in a desert industrial zone outside Phoenix. 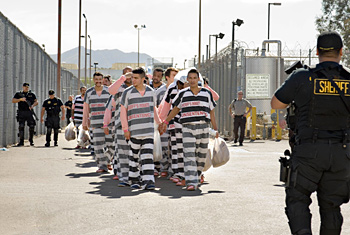 Along the way they were filmed by television news crews and guarded by at least 50 Maricopa County Sheriff’s Office (MCSO) deputies, wearing body armor and combat fatigues, armed with shotguns and automatic rifles. At least two canine units were present; a Sheriff’s Department helicopter hovered overhead.

The massive show of force was pure stagecraft for a blatant and dehumanizing publicity stunt orchestrated by Maricopa County Sheriff Joe Arpaio. The MCSO gave no indication that any of the immigrant prisoners were particularly violent or presented a grave danger to the public.

According to a MCSO press release, 220 immigrants were transferred to a “Tent City” surrounded by electrified fencing. “This is a population of criminals more adept perhaps at escape,” Arpaio stated in the press release. “But this is a fence they won’t want to scale because they risk receiving a shock – literally.”

The press release further detailed how the immigrants will be treated like any other prisoners, “with two exceptions.” First, “Arpaio wants them to be instructed in American immigration laws, as a way to help them understand that the violation of these laws has serious consequences not only to them but to society as a whole.” Second, immigrants who violate jail rules will be put on a desert chain gang. “This chain gang will work to clean the areas [of the nearby desert] which have been impacted by human trafficking trade,” the release stated. 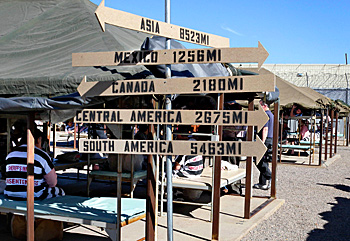 Humiliating prisoners by putting them on parade began in Imperial Rome. In modern times it’s been widely denounced as a barbarous practice. In March 2003, after the Iraqi government paraded five captured U.S. soldiers in front of television cameras, then U.S. Secretary of Defense Donald Rumsfeld protested that it was a violation of the Geneva Convention.

The Phoenix New Times pointed out that Arpaio’s immigrant parade was scheduled for the same day that MCSO Captain Joel Fox was scheduled to appear in court to appeal a $315,000 fine levied against him for channeling an illegal $105,000 campaign donation to the Republican Party in the name of a shadowy entity called the “Sheriff’s Command Association.”

“Which event do you think average news consumers will remember on Thursday – an administrative hearing concerning a convoluted tale of campaign finance laws, or the image of 200 Mexicans in stripes marching in chains down a public street?” asked the New Times. “Yeah, we thought so, too.”

Arpaio is lionized by Minutemen vigilantes and other nativist extremists for his controversial “287(g)” arrangement with U.S. Immigration and Customs Enforcement, which empowers the MCSO, a local agency, to enforce federal immigration law.

Many Latinos taken into custody in recent months by MCSO 287(g) squads have been pulled over for minor traffic violations, such as a broken headlight or an improper lane change, and then arrested when they’re unable to produce proof of citizenship or a valid visa. The operations, several of which have been concentrated in predominately Latino neighborhoods and conducted in some cases by MCSO officers wearing black ski masks, have drawn widespread accusations of racial profiling.

Maricopa County Supervisor Mary Rose Wilcox, an outspoken critic of Arpaio’s immigrant-bashing antics, told the Associated Press that today’s parade was “one of the most inhumane things I’ve ever heard.”

“[Arpaio’s] trying to justify this as a ‘budget savings,’ and I’m just appalled. It’s just another publicity stunt,” Wilcox said. “I don’t think you can segregate people that way, and we’re going to get all kinds of violations against us.”