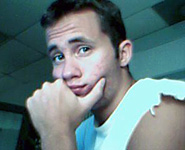 Richard Andrew Poplawski, who was arrested after a four-hour standoff that began when police intervened in a domestic dispute with his mother, said in a 2007 online profile that his “favorite cuss word[s]” included “you f------ n-----.” Around the same time, Hatewatch found, he posted a message to Stormfront.org, the largest white supremacist forum in the world, with a photograph of an eagle tattoo that he has on his chest and a mention that he was thinking about adding more tattoos. “I was considering getting life runes on the outside of my calfs [sic], or just one on my penis maybe,” he said in the posting, referring to the symbol of the National Alliance, for decades America’s leading neo-Nazi group until nearly collapsing in recent years.

At the same time, the Pittsburgh Post-Gazette reported today, Poplawski, 22, believed that the United States was run by a secret cabal of Jews, feared an attack on gun rights, thought that U.S. troops would be used against citizens, and concluded that 30 states had already declared their “sovereignty.” He also was said to be a fan of far-right websites run by antigovernment conspiracy-monger Alex Jones. Much of the Post-Gazette’s information came from Edward Perkovic, who told the paper — and numerous other media outlets — that he was Poplawski’s lifelong best friend. Perkovic said that his friend was opposed to “Zionist propaganda” and had told him that he would “defend himself” if anyone tried to take his guns away.

Perkovic appears to share those beliefs and then some. Until the MySpace profile belonging to “Eddie Perkovic” (which mentions his friend, Richard Poplawski) was scrubbed over the weekend, it contained a wealth of neo-Nazi material captured by Hatewatch. “I must point out the dangers of … our Zionist occupied government, and a slow, painstaking movement toward censorship, mixed bloodlines that will erase national identity … and the way the Zionist media controls everything you see and heard [sic] on your television and radio’s [sic].” Perkovic goes on to recommend The Protocols of the Elders of Zion, the notorious anti-Semitic forgery; The Turner Diaries, the infamous race war novel by National Alliance founder William Pierce; Jewish Supremacy by former Klan leader David Duke; and Civil War II, a fictional portrayal by Thomas Chittum of a civil war that tears America apart.

Poplawski is accused of shooting to death three Pittsburgh police officers — Eric Kelly, Stephen Mayhle, and Paul Sciullo III — and wounding a fourth before he was himself wounded in a furious shootout and taken into custody. Officials said that he and his mother had gotten into frequent disputes over the years, and acquaintances said that he had been dishonorably discharged from the Marines three years ago. The Post-Gazette also reported that court records showed Poplawski in 2005 threatened to kill his then-girlfriend. He was later accused of violating a protective order in that case.

Alex Jones, the conspiracy theorist in whom Poplawski reportedly was interested, runs two websites, Infowars and Prison Planet, that specialize in a series of the kind of paranoid ideas that animated the militia movement of the 1990s. Jones is a radio talk show host based in Austin, Texas, who has produced or directed films like “Martial Law 9/11: Rise of the Police State,” “Endgame: Blueprint for Global Enslavement,” “Matrix of Evil: Exposed,” and “The Obama Deception.” In 2006, he was detained by Canadian authorities as he headed to an Ottawa meeting of the Bilderberg Group, a body frequently accused by radical and anti-Semitic groups of being part of a shadowy international effort to destroy U.S. sovereignty.