The leader of Minutemen American Defense (MAD), a nativist extremist group that conducts vigilante patrols on the Arizona-Mexico border, was charged with two counts of first-degree murder Friday for her alleged role in the May 30 slayings of a Latino man and his 9-year-old daughter in Pima County, Ariz.

MAD Executive Director Shawna Forde, 41, allegedly orchestrated a home invasion robbery of a suspected narcotics trafficker because she was seeking drugs and cash to fund her group’s vigilante operations, law enforcement authorities said. The murders, including the killing of the child, were part of the plan, said Pima County Sheriff Clarence Dupnik. “She’s, at best, a psychopath,” Dupnik said of Forde in comments quoted by the Green Valley News & Sun.

Also arrested were MAD Operations Director Jason Eugene “Gunny” Bush, 34, the alleged triggerman in the murders, and Albert Robert Gaxiola, 42, a local member of MAD. Along with the two murder counts, Forde and her two associates were charged with one count of first-degree burglary and one count of aggravated assault.

MAD has been conducting vigilante patrols in southern Arizona since mid-May. Sheriff Dupnik reportedly said that between the time of the killings and her arrest, Forde remained in the area “still trying … to get together a large amount of money to further sophisticate the type of operation she’s interested in.” 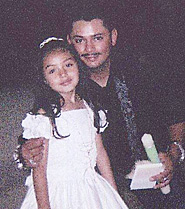 Forde denied the charges against her. “No, I did not do it,” she told reporters as she was led out of the Pima County Sheriff’s Office.

According to investigators, Forde and at least two armed men broke into a trailer occupied by Arivaca, Ariz., resident Raul Flores, his wife, and their daughter Brisenia. Bush allegedly shot and killed Raul Flores and Brisenia before Flores’ wife, who was also shot in the incident, returned fire, wounding Gaxiola. It’s unclear whether the alleged killers found any money or drugs.

Sheriff Dupnik called the alleged crime a “home invasion where the plan was to kill all the people inside this trailer because they might be witnesses, and rob them.”

Forde’s arrest for double murder comes not long after her involvement in a bizarre series of violent incidents in her hometown of Everett, Wash. They began last December when Forde’s estranged husband was mysteriously shot in their home. About a week later, on Dec. 29, Forde reported that she’d been the victim of a home invasion attack perpetrated by a trio of Spanish-speaking men who ambushed her in her kitchen, beat her unconscious, sexually assaulted her, and slashed the back of her neck with a knife. (Forde posted a set of photos showing what she claimed were injuries she suffered during the attack.) The following month, on Jan. 15, Forde suffered a gunshot wound to her arm. She told police that a strange man shot her in an alley two blocks from her home.

The Everett violence is still under investigation.