This past weekend, the white supremacist Council of Conservative Citizens (CCC) held its annual conference at the Cabot Lodge on the campus of Millsaps College in Jackson, Miss. The “surprise guest,” Mississippi State Sen. Lydia Chassaniol (R-14th District), was introduced by emcee Bill Lord — the CCC’s field director who is known for his racist “Martin Luther Coon” jokes — as “the right hand to the Governor [Haley Barbour].” Lord also identified Chassaniol as a “member” of the CCC chapter in Carroll County, one of a handful of Central Mississippi counties she represents.

In an E-mail, Chassaniol confirmed to Hatewatch that she is a member of the CCC, which she described as a “conservative organization.” She also wrote, “I do not consider myself racist,” adding that she believes “a person’s membership in any organization is a private matter.” She said that she had worked for years “with the children of the Mississippi Delta” and had spoken to the Greenwood Voters League even though, she said, it has “no members who are Caucasian.”

Gov. Barbour’s website shows that he has worked with Chassaniol in her capacity as chair of the Senate Tourism Committee. A May 12 press release from the governor’s office says Barbour “praised” Chassaniol for her contributions to a new slogan for the state’s highway signs, “Birthplace of America’s Music.” Ironically, the music the signs refer to — “from the blues, to country, to rock and roll, to gospel” — was largely produced by African Americans, who the CCC has described on its website as a “retrograde species of humanity.” 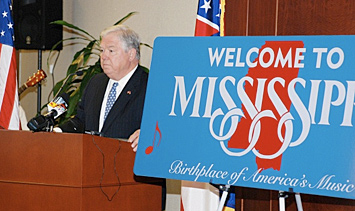 Calls to Barbour’s office for comment were not returned. The Mississippi state GOP office said it was unable to comment on the matter because their press officer was out of the office.

The CCC has been roundly condemned by prominent conservative organizations and the national GOP. The Conservative Political Action Committee called the group “racist” in 1998 and barred it from CPAC conferences. The Republican National Committee “forcefully” condemned the CCC in 1999, with its chairman urging Republicans not to join or attend its functions. Around the same time, then-U.S. Senate Majority Leader Trent Lott (R-Miss.) was embroiled in a national brouhaha over his purported membership in the CCC. Lott gave shifting explanations of his relationship to the group, but ultimately denied being a member.

Those actions are not surprising, given the guttural nature of the CCC’s racism and anti-Semitism. The CCC’s columnists have written that non-white immigration is turning the U.S. population into a “slimy brown mass of glop.” Its website has run photographic comparisons of pop singer Michael Jackson and a chimpanzee. It opposes “forced integration” and decries racial intermarriage for any reason. The CCC has lambasted black people as “genetically inferior,” complained about “Jewish power brokers,” called gay people “perverted sodomites,” and even named the late Lester Maddox, the baseball bat-wielding, arch-segregationist former governor of Georgia, “Patriot of the Century.”

Barbour had his own encounter with the CCC in 2003. As a gubernatorial candidate, he attended that year’s Black Hawk Barbecue in Carroll County, sponsored by the CCC to raise money for private academy school buses, where he was photographed with Bill Lord, the emcee for this past weekend’s event. Although he decried the group’s segregationist views as “indefensible” after that photo was posted on the CCC’s website, Barbour declined to ask to have it taken down. It was a matter of principle, Barbour explained. “Once you start down the slippery slope of saying, ‘That person can’t be for me,’ then where do you stop?” he asked. “Old segregationists? Former Ku Klux Klan?”

For her part, Chassaniol gave a rabble-rousing speech on “Cultural Heritage in Mississippi.” In a brief history of the state since 1540, Chassaniol complained that the U.S. was in decline, as evidenced by tributes to Michael Jackson, a “pedophile who’s being celebrated.” She indicated that the government wants to “take from those who have and give to those who don’t want to work for it.” And she worried that the 2010 national census might hand over government “to the radical left.”

A sponsor of two harsh anti-immigrant bills, Chassaniol encouraged CCC members to take part in upcoming anti-tax “Tea Parties,” which she praised in a recent editorial in her local Winona, Miss., newspaper. CCC members have crashed these events in the past.

Chassaniol ended her talk by encouraging her listeners to embrace their southern heritage. Describing the CCC as “lone voices crying in the wilderness,” Chassaniol ended on a positive note, “Seeing all of you here today gives me hope.”

Janet Smith contributed to this report.