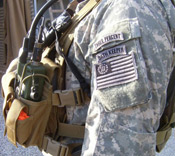 Oath Keepers, the militia/“Patriot” extremist group made up of law enforcement officers, military personnel and veterans, has posted a photo on its site showing (it says) “an active duty Oath Keeper in Mosul, Iraq” wearing two Velcro-attached “tabs” or patches, one saying “Oath Keeper” and the other “Three percent.” The flag patch beneath them is also an insignia of the “Three Percenters,” an informal alliance of hard-line gun owners.

The Oath Keepers figured prominently in a recent special report by the Southern Poverty Law Center on the resurgence of the antigovernment militia movement. The report described the group as “a particularly worrisome example of the Patriot revival.” Oath Keepers is fully on board with all the standard right-wing conspiracy theories, as evidenced by its official list of 10 “Orders We Will Not Obey,” in which it vows to resist any government efforts to “disarm the American people” or turn cities into “giant concentration camps.”

In July, the SPLC also presented Congress with growing evidence that extremists are infiltrating the U.S. military and urged Congress and the military to take steps to ensure that the armed forces are not inadvertently training future domestic terrorists.

A spokesman for the Defense Department, Lt. Col. Les Melnyk, confirmed that the uniform shown in the photo is an Army combat uniform, the kind worn by soldiers in Iraq.

Army regulations stipulate that any uniform item not expressly authorized for wear is prohibited. But Melnyk noted that a Velcro-attached tab can be put on quickly for a photo-op and just as quickly removed. We’re guessing that not many soldiers are really parading around Mosul or anywhere else with these things on display.

Oath Keepers has scheduled a national conference this weekend in Las Vegas, hometown of the group’s founder, Stewart Rhodes. The Las Vegas Review-Journal profiled Rhodes and the organization in a story on Sunday. The story included this quote from the SPLC’s Mark Potok: “I’m not accusing Stewart Rhodes or any member of his group of being Timothy McVeigh or a future Timothy McVeigh. But these kinds of conspiracy theories are what drive a small number of people to criminal violence. ... What’s troubling about Oath Keepers is the idea that men and women armed and ordered to protect the public in this country are clearly being drawn into a world of false conspiracy theory.”

And how does the Pentagon feel about Oath Keepers? “I don’t have a formal assessment of Oath Keepers for you,” Melnyk, the Pentagon spokesman, said in an E-mail. He noted that it is “a fairly new group” and said the Defense Department would defer to the judgment of the Department of Justice and the FBI. “Certainly if they were on an FBI list of gangs or groups espousing hate, DoD would find this a compelling reason for prohibiting membership.”

Melnyk provided the specific Defense Department regulation regarding prohibited extremist groups, and it clearly is aimed more at groups that discriminate based on such things as race, ethnicity or religion. Simple conspiracy theorists, for now, might get a free pass. The regulation reads as follows:

“Prohibited Activities. Military personnel must reject participation in organizations that espouse supremacist causes; attempt to create illegal discrimination based on race, creed, color, sex, religion, or national origin; advocate the use of force or violence; or otherwise engage in efforts to deprive individuals of their civil rights. Active participation, such as publicly demonstrating or rallying, fund raising, recruiting and training members, organizing or leading such organizations, or otherwise engaging in activities in relation to such organizations or in furtherance of the objectives of such organizations that are viewed by command to be detrimental to the good order, discipline, or mission accomplishment of the unit, is incompatible with Military Service, and is, therefore, prohibited.”

As the SPLC noted in its July report, however, the military services' track record when it comes to disciplining or purging extremists in their ranks has been spotty. Here's a story from Stars and Stripes, the independent military paper, based on the SPLC report.