A prominent member of a Canadian neo-Nazi group is wanted for attempted murder in connection with two bombings in Calgary. 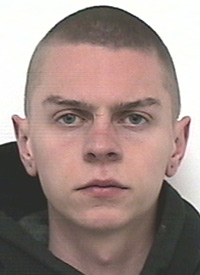 Police announced Monday that they’re looking for 24-year-old Kyle Robert McKee, along with a 17-year-old who cannot be publicly identified under Canadian law because he’s considered a juvenile. Besides attempted murder, they both face charges of possessing, making or controlling explosives, and possession of a weapon or imitation for a dangerous purpose.

No one was hurt in the incident, which occurred on Saturday around 7:15 a.m. in northeast Calgary. After someone reported hearing gunshots, police found what appeared to be an improvised explosive devise (a homemade bomb, or IED) in a large parking lot between two apartment complexes. The IED had been detonated. A second IED that also had been detonated was discovered near the scene.

McKee, a slight man with a shaved head, has “Kill Jews” tattooed on his shins. He often acts as spokesman for the Aryan Guard, a racist gang whose “white pride” marches have caused a stir in Canada’s third-largest city. However, police say there’s no evidence that the bombings were hate crimes. “The victims in this case knew the offenders and share similar beliefs and values,” stated a news release from the City of Calgary.

Police haven’t released further details about a motive. However, former Aryan Guard member Tyler Sturrup identified himself as one of the victims on his Facebook page, according to Anti-Racist Canada, a blog that covers the Aryan Guard. Sturrup had left the group to help form the Western European Brotherhood (W.E.B.). W.E.B. participated in the Aryan Guard’s 2008 and 2009 marches through downtown Calgary to celebrate “white pride,” though recently there’d been friction between the two groups.

The Aryan Guard was founded in 2006 with help from the country’s two best known white supremacists, Paul Fromm of the Canadian Association for Free Expression, and National Socialist Party of Canada leader Terry Tremaine. Though the bombings apparently were not bias crimes, the Aryan Guard has been linked to several assaults on minorities, including the beating of a Japanese visitor in July 2008 by a 17-year-old group member. The group has roughly 20 full-fledged members, many of whom have criminal records, along with 20 to 30 associates.