For years, students at the University of Oregon generally avoided Pacifica Forum, the formerly left-wing discussion group that has increasingly embraced right-wing extremism. Many students weren’t even aware that the group meets on campus.

That all changed last Friday, when students packed the Walnut Room, where Pacifica Forum was holding its weekly meeting, to protest the group’s presence in the Erb Memorial Union, the university’s student union. As campus security officers stood guard, the protesters — including some faculty and staff — held signs saying “Hate Speech is not Free Speech” and “Pacifica Forum = Nazi Dupes.” In all, at least 75 people, most of whom were opposed to Pacifica Forum, attended the heated, at times emotional, meeting — a far cry from the 10-12 people who usually show up at forum programs. 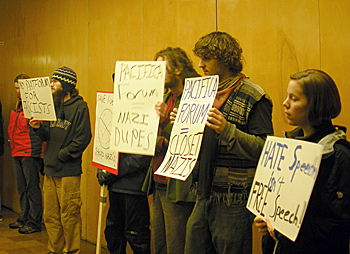 Last week’s protest, which followed a Pacifica Forum meeting last month that one attendee likened to a Nazi rally, kicked off a student-led campaign to expel Pacifica Forum from the student union. (The Southern Poverty Law Center lists the forum as a hate group, a fact that has not made members happy.) As university officials grapple with how to address the community’s concerns, students are preparing for another protest at this Friday’s Pacifica Forum meeting. Students are mobilizing in part through a Facebook group — “UofO students and community members again the Pacifica Forum” — that has attracted more than 1,200 members since it was created last Friday.

“Since starting the Facebook group, awareness has risen exponentially,” said Devon Schlotterbeck, a University of Oregon sophomore who was inspired to launch the Facebook group after listening to hateful comments from Pacifica Forum participants last Friday. “People’s reactions are mostly of shock and of disgust and also a lot fear that this group is on our campus.”

Students are concerned that the group is allowed to meet for free in the student union — which is financed mostly by student fees — under a policy that allows retired professors, including Pacifica Forum’s founder, to book space there at no cost. “The university is subsidizing the most prolific outlet for white nationalist, white supremacist, neo-Nazi public presentations between Seattle and Sacramento,” said Michael Williams, a local resident who’s been monitoring Pacifica Forum for six years. “It’s not a question of censoring them or shutting them down; it’s a question of venue. Should they really be meeting in an academic setting for free?”

University officials are asking themselves similar questions. “There’s a very serious and direct review of policies and practices in terms of use of space [by outside groups],” said Charles Martinez, the university’s vice president for institutional equity and diversity. “I anticipate some movement on this in very short order.” The university is looking at scheduling priorities for outside groups, appropriate places for them to meet on campus, fees associated with their use of facilities, and the policy that allows retired professors to reserve campus rooms at no cost, Martinez said. However, the review will not result in a content-based test for organizations wanting to use campus facilities. “There will always be a way for outside groups to meet at what is a public university,” he said.

The protests were provoked by a Dec. 11 Pacifica Forum meeting during which longtime Pacifica Forum member Jimmy Marr lauded America’s largest neo-Nazi group, the National Socialist Movement, and invited audience members to join him in giving the Nazi salute. (At least five people did.) Last Friday, Pacifica Forum’s program lived up to the promise of its title — “Everything You Wanted to Know About Pacifica Forum But Were Afraid to Ask” — with the group’s bigotry once again on prominent display. Marr went so far as to give the straight-armed Nazi salute in front of a local rabbi as the rabbi tried to ask a question. “[Marr] did this as a regular method of interrupting speakers from the floor,” Williams said. “He would sieg heil at them.”

Also at the meeting, a University of Oregon student cried as she told Valdas Anelauskas, an anti-Semite and  frequent Pacifica Forum presenter, that he was making her feel unsafe, according to local news accounts. She was reacting to Anelauskas’ assertion during a talk last summer that Andrea Dworkin — the late feminist who associated pornography with sexual violence — was too ugly to rape. Anelauskas told the student “you’re not ugly.” (In a subsequent letter to The (Eugene, Ore.) Register-Guard, Anelauskas said he condemns rape, but also suggested that the student’s reaction was staged.)

The Eugene Anti-Hate Task Force, a group of local activists that has been monitoring Pacifica Forum for several years, is scheduled to meet later this month with University of Oregon President Richard Lariviere and other university officials to discuss how to deal with Pacifica Forum. “They seem convinced they have a serious problem and they need to do something about it,” Williams said.