A leading anti-abortion webmaster who is widely known for his extremist tactics is behind a new Internet site taking aim at gay and abortion rights supporters with ties to Kenya.

Neal Horsley — best known for his “Nuremberg Files” website targeting physicians who provide abortions — now controls ProjectSEE.com. ("SEE" stands for Stop Exporting Evil!) Horsley’s latest website features “Not Wanted” posters with the photographs and, in some cases, contact information of purported gay rights activists and abortion providers working in Kenya. It lists the names of others, along with an appeal to “send us INFO!” The website encourages readers to print out the posters and distribute them in the United States and Kenya. (Abortion laws are highly restrictive in Kenya and homosexual activity is illegal. In recent weeks, Kenyan activists have reported a rash of anti-gay violence, including the Feb. 12 beating of a man outside a health center that provides HIV/AIDS services, according to Human Rights Watch.) 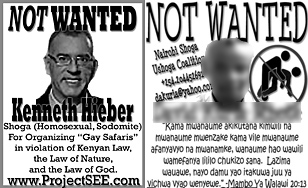 “Project SEE Coalition roving photojournalists on the ground in Africa and the USA are currently gathering evidence which we hope will lead to the arrest and conviction of members [of] the international conspiracy to violate anti-abortion and anti-sodomy laws worldwide,” the website states. Elsewhere, it adds: “We advocate that abortionists and women determined to murder babies be driven back into filthy back alleys like other murderers, and advocate ‘homosexuals’ be likewise driven back into the closet, arrested and prosecuted for sodomy according to God’s law.”

One of those targeted by the website is Kenneth Hieber, who owns a New York-based travel company, Gay2Afrika, Inc., that caters to gays and lesbians. “I was repulsed. Absolutely repulsed,” Hieber, whose photograph appears on “Not Wanted” posters published on ProjectSEE.com, told Hatewatch. The posters refer to Hieber as a “shoga” — a derogatory Swahili term for homosexual — and one of them includes a biblical verse in Swahili (Leviticus 20:13) calling for the death penalty for homosexuals. (“If a man also lie with mankind, as he lieth with a woman, both of them have committed an abomination; they shall surely be put to death. Their blood shall be upon them,” according to the King James version.) The website also identifies Hieber as the CEO of Gay2Afrika and provides Hieber’s work address and phone number. Emblazoned on a snapshot of the Gay2Afrika website are the words, “Is Homo-Sex-Tourism Coming to your Town?”

Hieber said this characterization of Gay2Afrika is false. “We are a company that serves with the utmost dignity and respect the gay and lesbian traveler to Africa. To even begin to contemplate that we are potentially selling sex tourism is absurd.” He also said ProjectSEE.com has made him sufficiently concerned that he is increasing security for himself and his staff. “I feel very threatened personally,” said Hieber, a naturalized U.S. citizen from South Africa.

Hieber E-mailed Go Daddy, the website host for ProjectSEE.com, which urged him to ask his local law enforcement agency to investigate and then to contact Go Daddy if the website needed to be taken down, according to an E-mail Hieber forwarded from Go Daddy’s Abuse Department. (Hieber said he contacted the New York Police Department shortly after discovering the website on March 8. Officers said they did not believe the website constituted a direct threat, though they would consult with their legal department. Hieber hasn’t yet heard back from the NYPD, which did not respond to a request for comment from Hatewatch.) Christine Jones, general counsel for Go Daddy, said the company has checked the Web links it received in the complaint about ProjectSEE.com. “Because there’s nothing that’s per se illegal, even though there seem to be things that could offend some people, our current position is we’re going to leave it up,” she said. As it did with Hieber, the company typically asks people to speak to their local police about whether there’s a legitimate threat. “We’re not in a position to be the decider of fact in these cases,” Jones said.

Horsley, 65, of Carollton, Ga., is listed as the registrant and administrator for ProjectSEE.com, which in some ways resembles a toned-down version of his “Nuremberg Files.” In the late 1990s, the self-described former marijuana trafficker created the online listing of abortion providers and other supporters of abortion rights, with the names of those who’d been murdered crossed out and the names of those who’d been wounded in gray. This website became a central issue in a civil lawsuit brought by Planned Parenthood and several abortion doctors against some of the nations most hard-line anti-abortion activists and groups. (Horsley was not a party to the lawsuit.) Though there were no explicit calls for violence on the website, a federal jury decided in 1999 that it constituted a “true threat” and thus was not protected by the First Amendment. The plaintiffs were awarded $107 million. The trial judge also ordered Horsley to take down his website.

Even after a federal appeals court largely affirmed the verdict, Horsley was undeterred. By 2001, he’d launched his www.abortioncams.com website, which featured videos and photos of patients entering and leaving abortion facilities. In 2008, he was found guilty of obscenity for a campaign sign showing the head of an aborted fetus. Earlier this month, Atlanta police arrested Horsley and charged him with making terroristic threats, disseminating threats through the Internet and criminal defamation, according to the Fulton County Sheriff’s Office. The Atlanta Journal-Constitution reported that the charges stemmed from threats he allegedly made against the singer Elton John, who told Parade magazine that he believes Jesus was gay. Horsley was released yesterday from Fulton County Jail after posting a $40,000 bond. Horsley did not respond to several phone and E-mail messages this week.

Also promoting ProjectSEE.com is Michael Bray of Wilmington, Ohio, who was convicted in connection with a series of 1984 bombings in Maryland, Delaware and Washington, D.C. The bombings targeted clinics, the American Civil Liberties Union and the National Abortion Federation, a trade association of abortion providers. According to Bray, the 1993 killing of abortion doctor David Gunn was a “rational way of following the Operation Rescue dictum: ‘If you believe abortion is murder, then act like it.’” Shortly before the trial of Michael Griffin for Dr. Gunn’s murder, Bray was among 34 signers of a “defensive action statement” that asserted Griffin was justified if he killed Gunn because he did it to save the lives of unborn children. Bray, 57, is listed as a contact on ProjectSEE.com and endorses the site in an online statement. In a brief phone interview, he said he’d given support to the site, but was not directly involved in it.

Meanwhile, the International Gay and Lesbian Human Rights Campaign, the Gay and Lesbian Alliance Against Defamation (GLAAD) and other human rights and faith-based groups are discussing how to challenge the website without further endangering the leaders in Africa who are being targeted by it.

Jonathan O’Toole, the ProjectSEE.com editor, did not return a phone message seeking comment.