Nine members of the Hutaree Militia were indicted today in what federal authorities are describing as a plot to murder a law enforcement officer in Michigan and then attack other officials who gathered for the funeral. The five-count indictment followed a series of raids in Michigan, Ohio and Indiana over the weekend.

The Hutaree Militia first came to the attention of the Southern Poverty Law Center (SPLC) in 2009, when researchers found the group's MySpace page. Two chapters of the militia, one in Michigan and one in Utah, were included on the SPLC's list of militia groups released earlier this month. The Utah chapter held at least one training in 2009.

The Hutaree Militia had close links to several other American militias, according to the group's MySpace profile. The profile, which carried the slogan "violence solves everything," shows that the group has 366 "friends." The militia's page was linked to dozens of other militias, including the Ohio Militia, the Michigan Militia Corps, the Kentucky State Militia, the Central Texas Militia and others. The indictment alleges that in February "several of the conspirators attempted to travel to Kentucky to attend a summit of militia groups."

The government alleges that members of the antigovernment Hutaree Militia, which is based in eastern Michigan's Lenawee County and has been conducting "military-style training" there since 2008, conspired to "levy war against the United States." According to the indictment, Hutaree members view local, state and federal law enforcement as an enemy "brotherhood" that they were preparing to engage in armed conflict.

Authorities said the Hutaree planned to kill an unidentified, local law enforcement official, then attack the funeral with improvised explosive devices and "explosively formed projectiles," which, according to the indictment, constitute weapons of mass destruction.

The indictment by a grand jury in Detroit covered charges that took place between August 2008 and today. The defendants are David Brian Stone, 45, and his wife, Tina Stone, 44, his son Joshua Matthew Stone, 21, of Clayton, Mich., and his other son David Brian Stone Jr., 19, of Adrian, Mich. Also arrested in Michigan and indicted were Joshua Clough, 28, of Blissfield and Michael Meeks, 40 of Manchester. In Indiana, Thomas Piatek, 46, of Whiting was arrested. In Ohio, Kristopher Sickles, 27, of Sandusky and Jacob Ward, 33, of Huron were arrested. 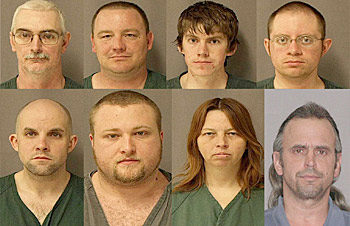 The arrests again show the growing danger from America's radical right, where a pervasive rage against the government has become red hot. In a report released in March, "Rage on the Right," the SPLC documented 512 antigovernment "Patriot" groups, which include armed militias, operating by the end of 2009. That represents a 244 percent increase over the previous year's count of 149. The number of militia groups rose from 42 in 2008 to 127 in 2009.

The SPLC documented a total of 75 domestic terrorism plots between the Oklahoma City bombing in 1995 and 2009. The majority of those plots were concocted by individuals with extreme antigovernment views.