Sharpen your pencil and summon your muse, it’s time for the annual “Redneck Poetry Contest.” 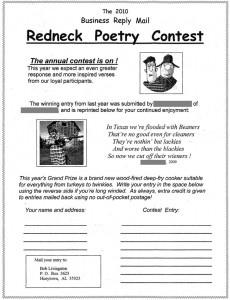 That’s right. The call has gone out for the best redneck rhymin’ around. And according to the entry form received by the Hatewatch staff, the winning poet will take home a “brand new wood-fired deep-fry cooker suitable for everything from turkeys to [T]winkies.”

But before you start, a word of warning: If last year’s winner is any indication, the competition will be stiff. That charming entry pulled off the hat trick by smearing blacks and Latinos and threatening castration — an incredible feat achieved in only 28 words. Here’s the winning entry:

“That’re no good even for cleaners

“So now we cut off their wieners!”

The entry form offers little information about the organizer. But it asks would-be poets to send their entries to one Bob Livingston at P.O. Box 3623, Hueytown, Ala., 35023. That address provides an interesting glimpse of the possible organizer and some of the favorite conspiracy theories and topics of the antigovernment “Patriot” movement. The listed post office box is also offered as a means to contact Personal Liberty Digest, a website where someone identified as Bob Livingston has warned that vaccines are useless and dangerous and has written about the Bilderberg Group, a favorite target for the Patriot movement and other far-right conspiracy theorists.

Responding to requests for comment, a woman who identified herself as a representative of Livingston said he was out of town and not available for comment. The Personal Liberty Digest website describes Livingston as “an ultra-conservative American who has been writing a newsletter for 41 years. Bob has devoted much of his life to research and the quest for truth on a variety of subjects.”

That quest for truth apparently led him to author the book, How to Survive the Collapse of Civilization, a tome that has been hawked via an E-mail from the right-wing WorldNetDaily news site. That E-mail warns that terrorists could attack the U.S. power grid with an electromagnetic pulse device that “could throw America into the dark ages in a split second.” As the book’s name implies, techniques to survive a terrorist attack, a “global epidemic” and social unrest are offered.

The book’s author also apparently edits “The Bob Livingston Letter,” a “privately circulated” newsletter that offers, according to its website, “secret health and investment strategies — long used by the wealthy, but CENSORED by the government.”

A 2006 issue offered a yearly subscription to the newsletter containing these great secrets for $65 or $6 for a single issue — although the website shows the standard rate for a yearly subscription is now only $59. The same Hueytown post office box as that used for the poetry contest is offered as an address for the 2006 issue. And it appears that post office box is still the address offered in a 2010 issue.

At the bottom of the 2006 issue’s front page is an interesting mission statement of sorts: “Since 1969, we have been reaching out to awaken sleeping Christians to the glorious gospel of grace. God has blessed us. He has shown us his kingdom. Therefore we have a Christian responsibility to help others see the kingdom of God.”

There’s no mention how honoring poets threatening the castration of Latinos fits into the gospel.