When most people think about Bill Gates, what comes to mind is his great technological success and his resulting great wealth. Many also have warm feelings toward him because of the decision by Gates and his wife to donate the bulk of their multibillion-dollar estate to the Bill and Melinda Gates Foundation, whose slogan is “all lives have equal value.” The foundation has devoted itself to improving the health and education of children around the globe.

But for radio host Alex Jones, the conspiracy-monger-in-chief of the antigovernment “Patriot” movement, that is all complete malarkey. What the Gateses are really up to, Jones claims, is using their vaccines to sterilize and depopulate the world — a tactic that is part of a grand conspiracy by the global elite to seize control of just about everything. 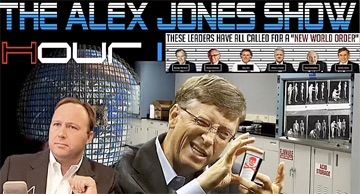 Why is Jones suddenly so interested in Gates and his foundation’s work? In February, Gates gave a presentation about global warming and the impact humans have on carbon dioxide (CO2) production to the annual TED conference. TED is a small nonprofit that holds annual events that bring together experts in technology, entertainment and design. At the conference, Gates spoke hopefully about the impact of vaccines in the developing world, suggesting that poor families will not feel compelled to have as many children if more of their children are able to survive to adulthood, a view that many population specialists agree with. This would be beneficial in another way, Gates pointed out, because fewer people would ultimately mean lower CO2 emissions.

But that’s not what Alex Jones heard. During a March 2 radio segment in which Jones called Gates “a huge eugenicist” (eugenics is the discredited pseudo-science of creating a better human race through selective breeding), Jones alleged that Gates is part of a massive globalist conspiracy that plans to establish a “scientific dictatorship to control [Americans].” Gates’ aim in promoting vaccines, for Jones, has nothing to do with child health. It is a massive plan for sterilizing the population.

Jones’ attack on Gates was preceded by a March 1 post on his website, prisonplanet.com, by British conspiracist Paul Joseph Watson. In it, Watson writes: “Quite how an improvement in health care and vaccines that supposedly save lives would lead to a lowering in global population is an oxymoron, unless Gates is referring to vaccines that sterilize people.” Watson goes on to allege that Gates wants vaccines to “sterilize people,” which Watson writes “is precisely the same method advocated in White House science advisor John P. Holdren's 1977 textbook Ecoscience, which calls for a dictatorial ‘planetary regime’ to enforce draconian measures of population reduction via all manner of oppressive techniques, including sterilization.”

The attack on Gates has gained traction on the Internet, where several edited versions have been posted. Nearly 100,000 viewers have logged onto Youtube to watch a version of the speech posted by “grimreaperdutchphil.” Another version of the Gates speech is posted under the title, “Bill Gates wants a Billion Dead! Vaccines and Health Care will do the Job!” Nearly 20,000 people have viewed that video.

The comments have been vicious. Someone writing under the name “roodeet” suggests, “i think bill should kill himself and his dissgusting [sic] family tree.” “Exoticgoddess” is more blunt, “Yea, let’s lower the world population Bill ... starting with you.”