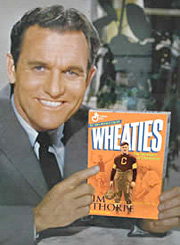 There was a time when former Olympic athlete Bob Richards seemed the personification of the all-American man: A two-time gold medal winner in the pole vault, he was the first jock to appear on the front of boxes of Wheaties — “the breakfast of champions” — as well as the first spokesman for the cereal.

But for some, Richards is the all-American white gentile man. In a message posted on the website of the white supremacist American Third Position — the A3P — chairman William Daniel Johnson says that he met recently with Richards at the latter’s sprawling ranch west of Dallas. “Bob Richards has joined our cause,” Johnson proclaimed. Hatewatch’s calls to Richards’ ranch yesterday seeking comment were not returned.

That A3P’s cause is to “represent the political interests of White Americans,” according to its mission statement. The California-based organization hopes to unite disaffected racists and field candidates for political offices across the United States.

Whether A3P’s overwhelmingly young male members and sympathizers have even heard of or care about an octogenarian whose popularity waned decades ago remains to be seen.

The A3P became active in January and has recruited some of the leading lights of the contemporary radical right. One of its directors is Kevin MacDonald, a psychology professor at California State University, Long Beach, who has written a trilogy of anti-Semitic books. Another is James Edwards, host of the racist Tennessee radio program, “The Political Cesspool.” As for Johnson, the chairman, he’s a veteran white supremacist who has been cozy with Klansmen and neo-Nazis. The Los Angeles lawyer has advocated stripping the citizenship of and deporting millions of non-whites — indeed, anyone with a “discernible trace of Negro blood” — from America.

That Richards, 84, apparently is sympathetic to the A3P isn’t all that surprising, despite the squeaky clean image he enjoyed as a gold medal athlete (1952 and 1956), Wheaties icon, reverend in the conservative Church of the Brethren and motivational speaker. In 1984, he was the presidential candidate of the newly formed U.S. Populist Party created by Willis Carto, a racist, Holocaust-denying publisher. Richards and his running mate received 66,324 votes out of more than 92 million cast. The Populist Party’s presidential standard-bearer four years later, in 1988, was ex-Klansmen and anti-Semite David Duke; in 1992, it was onetime Green Beret James “Bo” Gritz, an antigovernment zealot who has fretted about gays, feminism and Jews. The Populist Party folded before it could field a candidate for the 1996 election.

Johnson says he wrote to Richards to tell him about the A3P and its plans to make a short video “on the decay of Western Civilization and what can be done to stop this decline.” He asked if Richards would consent to an interview for the video, which he said will be posted on the A3P website and on YouTube. Richards called him, Johnson said, and the men met at Richards’ ranch last Saturday.

Richards and his wife support Johnson’s goal of a pro-white political party, Johnson wrote. Near the end of a three-hour conversation, the men reportedly agreed that they would try to organize a forum at a “pro-free speech university” to be overseen by the League of Women Voters and sponsored by the A3P at which the importance of third political parties would be the topic. Johnson and Richards would speak about the A3P at the forum, Johnson said.

The plan calls for Richards to personally invite “heavy hitters” with third-party ties to the proposed event, including Pat Buchanan, Ross Perot, Ralph Nader, Bill Moyers, Alan Keyes, Colin Powell and Ron Paul. Just one problem, according to Johnson: While Richards “knows the heavy hitters … he does not have regular contact with them, so it will really be a cold call on his part. We must find the contact numbers for them.”

Johnson proposed that the forum be held six months from now. Richards’ response, according to Johnson: “Heck. Our country is dying. Six months is way too long. Let’s do it right away.”