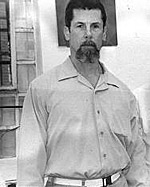 Bruce Carroll Pierce, the gunman in the 1984 murder in Denver of Jewish talk show host Alan Berg, died Monday afternoon of natural causes. He was 56 years old and serving the 23rd year of a 252-year sentence at the Allenwood Federal Correctional Complex in Pennsylvania.

Pierce was a founding member of the right-wing terrorist group The Order, which went on a crime spree in 1983 and 1984. The Order’s goals included the assassination of racial enemies and the creation of a guerilla army to resist and overthrow the U.S. government. The group funded its activities by counterfeiting money and by committing a string of armed robberies, culminating in the July 1984 theft of $3.6 million from an armored car on a highway in Ukiah, Calif.

Alan Berg’s offense was vigorously insulting white supremacists and adherents of the anti-Semitic Christian Identity theology on his call-in radio program on KOA-AM. He was selected for death after members of The Order, which was also known as the Bruders Schweigen (German for Silent Brotherhood), decided that two others higher on their assassination list — TV producer Norman Lear, whose work lampooned bigotry, and Morris Dees, co-founder of the anti-racist Southern Poverty Law Center — would be too hard to get to. Pierce shot Berg 13 times with a MAC-10 machine gun on the evening of June 18, 1984. Another member of The Order, David Lane, drove the getaway car, while still others served as lookouts.

The Order was founded in September 1983 by Robert Jay Mathews, who was then the Pacific Northwest coordinator for the neo-Nazi National Alliance, based in West Virginia, and also an associate of the neo-Nazi Aryan Nations of Idaho. (Mathews lived in Metaline Falls, Wash., at the time.) Mathews took the name of the group from The Turner Diaries, a futuristic race war novel written by William Pierce, founder and leader of the National Alliance. Ultimately, more than 20 people, including many members of the Aryan Nations and other groups, joined. In addition to the assassination of Berg, members also murdered one of their own who they thought had loose lips. In the end, the group was uncovered by authorities who caught a member passing counterfeit bills and “turned” him. Mathews was tracked to a house on Whidbey Island, Wash., and killed in a fiery 1984 shootout with federal agents. His death is still commemorated annually by hard-line white supremacists.

Bruce Pierce was captured in March 1985 and eventually sentenced to a total of 252 years in prison in the course of trials for the murder and various other crimes. At a 1986 trial for racketeering and armored car robbery, he remained unrepentant. “I’m not going to waste your time or mine and beg for mercy,” he told the judge. "Whatever happens, I'd like to bring honor to myself, glory to my brother kinsmen and glory to God." He never recanted his white supremacist views.

On the hate website “Free The Order,” Bruce Pierce and his compatriots are honored by white nationalists. The site contains biographies of the Order’s founders, articles written by Order members while in prison, and even a guestbook where well-wishers can leave comments. Visitors can also sign up for the “Adopt A Bruder” program and pledge to donate a certain amount of money to a jailed Order member every month. To this day, many Neo-Nazis and other white nationalists still revere The Order; its members did things that others only talked about.

The story of The Order and its battle against the “Zionist Occupation Government” (or ZOG, meaning the federal government) has become mythic on the radical right. It has inspired numerous acts of violence and attempted violence, including a St. Louis copycat group known as The New Order. That group’s members plotted unsuccessfully to assassinate the SPLC’s Dees and to rob banks. One brought a pistol to a 1997 speech by Dees, but turned back when faced with a metal detector.

More importantly, perhaps, The Order marked a watershed in the history of the American extreme right. Before its campaign of terror, most radical-right groups, like the Klan, had sought to restore what they imagined were the good old days — a world in which black people knew their place and whites ruled. At times, they were aided by sympathetic authorities of one kind or another, especially in the South. But The Order, acting on the vision of the National Alliance’s William Pierce, sought to completely overthrow the existing order in the United States. It was revolutionary, not restorationist, seeking to build a 100% white, independent nation with little resemblance to the America that preceded the Civil War.

In prison, Pierce was largely abandoned by his allies. Of all of the men who served Mathews’ cause, only David Lane, who died in prison in May 2007, remained seriously involved in white nationalist discourse after imprisonment. (Lane wrote the movement’s most famous motto, the so-called “14 Words”: “We must secure the existence of our people and a future for White children.” He also expressed some his creepy attraction to two 14-year-old girls.) Pierce complained of his isolation in a letter from prison quoted in Leonard Zeskind’s 2009 book Blood and Politics: “There is no mail and no assistance at all. … [F]rankly, it hurts to see mongrel drug dealers, pimps, and the ungodly receive more attention.”

Still, commenters on the neo-Nazi Web forum Vanguard News Network have been sending up valedictories on the great Bruce Pierce since his death Monday. “A belated thank you, Bruce, for silencing forever that horrendous, croaking k---,” wrote “Rottenfuhrer.” “Rest in peace Brother,” added “SA Mann.” “I’m sure he is up there in Valhalla having a nice tall cold one with Bob Mathews. … Hail the Order!” And, from “Hawthorne”: “Rest Well Bruce. Your name is now etched alongside the other warriors and heroes of our movement — forever!”