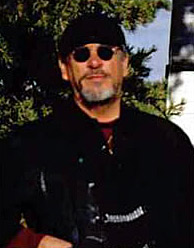 The last few years have been trying for New Mexico anti-Semite and militia proponent Clayton Douglas, but that hasn’t dampened his entrepreneurial spirit — or the high esteem in which he holds himself.

Douglas, 64, is a motorcycle aficionado who used to publish a biker magazine called Thunder Riders and another periodical titled Free American. The latter was a showcase for conspiracy theories, offbeat medical remedies and anti-Semitic screeds, such as “Are the Jews Behind the Destruction of America?” He also was information officer for the New Mexico Militia in the 1990s, sold tracts of the anti-Semitic Christian Identity theology at a 2002 expo, and blamed Jews for the Sept. 11, 2001, terrorist attacks at another conference. As if that wasn’t enough, he was for a time mayor of the tiny hamlet of Bingham, N.M., which he succeeded in having declared a “U.N.-free zone.” He self-published a couple of “adventure novels” he said were modeled on John D. MacDonald’s Travis McGee series. And he broadcast a daily shortwave radio program.

But Douglas’ world crashed in 2004, when he was struck by a car while riding his motorcycle. He says he was hospitalized for four months with severe head and other injuries and doctors gave his family little hope he would survive, or, if he did, have all his faculties. “The doctors had no idea of the sort of man Clay Douglas was,” he writes of himself in the third person on his website.

When Douglas was released from the hospital, his wife of 25 years promptly left him, and his businesses were in tatters, he says. He eventually resumed his radio show on the Internet and combined his businesses into one entity, CRD Publishing.

Nowadays, Douglas is still hawking his books and DVDs on his website, and posting anti-Semitic and conspiracy-laden content.  But, in a new twist, he’s also promoting the benefits of hemp and of investing in so-called “Liberty Villages.” The latter project, which Douglas describes as a “national franchise opportunity,” apparently entails investors purchasing trailers constructed to look like cabins, teepees and yurts on property Douglas owns in New Mexico; the “villages” would cater to itinerant bikers traveling around the country. Ultimately, Douglas says that his Liberty Villages — none of which seem to have been built or even begun — aim to become self-sufficient communities that recreate “the kind of neighborhood we had in the beginning here in America.” Each Liberty Village in the Southwest will apply for the right to grow medical marijuana, he adds.

Douglas promises short-term financing, low interest rates and a variety of architectural styles. And time is of the essence, to hear Douglas tell it, what with high gas prices, “millions of illegals roaming our streets” and ominous detention centers being built.

But there are hints that Douglas’ strange little empire is struggling. He has posted a lengthy proposal for potential investors in his ventures. He needs $25,000 to cover existing debt and basic essentials and another $15,000 for expansion. With additional capital and staff, he envisions cross-promotion opportunities between his biker magazine, his radio show and the products and books he hopes to sell. He hopes to resurrect his Free American magazine that “explores the conspiracy version of history,” by combining it with Thunder Riders. His radio shows could be archived for late night programming from participating radio stations  “until his popularity propels him into primetime with [Rush] Limbaugh, [Michael] Savage, [Don] Imus and [Michael] Reagan,” he writes, as usual, in the third person.

Sound grandiose? Not at all, Douglas says. Indeed, “many commanding officers in our armed services, police captains, intelligence operatives, Congressmen, Senators, governors and even Presidents have read his articles, relied on his intelligence, listened to his words over the airwaves for better than ten years.”

And who can blame them? “Tall, well built, handsome with an IQ well into the genius level, Clay seems to be a natural leader,” Douglas writes, steering clear of any hint of false modesty. He’s “personable, having a quick wit and a sharp mind” and “any of his videos will glue a couple to their couch for an evening.” He also is “self disciplined, possessing a will of iron, no fear.”

Despite the healthy state of his self-esteem, Douglas anticipates skepticism. “You may be asking yourself, if the above description is accurate, why isn’t he in Hollywood raking in the big bucks instead of working alone in his studio? Major media companies pay big bucks for personalities with less talent. Why hasn’t a network scooped this guy up? For the same reason the U.S. Army turned down his application for OCS [Officer Training School]. Sorry, son, someone with your IQ will question orders. They were right! Clay Douglas is the ultimate rebel.”

It’s these qualities, Douglas assures would-be investors, that “earned him the respect off equally strong men who have come back from war to mount the steel horses that are the symbol of the freedom they were willing to fight for. It is these qualities that make thousands of copies of Thunder Riders and Free American fly off the shelves around the country.”

Now all the self-described genius needs is your money.