Now that he's gaining in years, former Klan boss and longtime white supremacy advocate David Duke, who in his youth gained a notorious reputation as a womanizing playboy, is apparently now shifting to a more traditional role of moralizing geezer. Witness his most recent video "lecture," wherein he piously instructs his audience on the historical roots of the "sexual revolution" — which, in Duke's view, is the product of Sigmund Freud's theories of psychoanalysis and therefore is yet another civilization-destroying product of conniving Jews:

Duke: Wherever the globalist media reaches on this planet, there is an ongoing sexual revolution. It should be called sexual dehumanization. In traditional Western culture, sex is idealized and embedded with the idea of family and children and the deep and sacred respect for the love between a man and a woman, and marriage as a beautiful, even holy, institution.

A perfect example of the veneration of womanhood, fidelity and purity, as expressed in countless artworks, is the Virgin Mary. The Madonna is also venerated in the Muslim Koran, which defends Mary from the Jewish Talmudic slanders that claim Mary was a w---- and Jesus a bastard. I hate to quote those words.

Today the name Madonna fits the Talmudic slander. It's the image of a degenerate superstar w----, engaging in gang sex and mocking the crucifixion. The latest media-promoted female phenom is Lady Gaga, and this teen idol is also depicted engaging in gang sex, sadism, masochism, and other forms of degeneracy, along with her trendy music. Now this is the hottest new star promoted by the Jewish controlled globalist media, including MTV – Sumner Redstone. Real name: Rothstein.

The media of the Western world, and thus of the whole globe, has become a weapon of mass destruction of the highest in human values. The human cost has been enormous. Hundreds of millions of families have been destroyed. Children now commonly grow up without fathers. Sexually rooted epidemics, including STDs, hepatitis and HPV are now soaring. AIDS, a disease primarily of promiscuity, will cost hundreds of millions of lives. Millions of people have suffered sterility, and will never know the joy of children. Child rape, molestation, and abuse has grown exponentially.

Never mind the hypocrisy of the nation's foremost practitioner of racial and ethnic dehumanization lecturing us about "sexual dehumanization." What's agonizingly hilarious about this diatribe is how starkly Duke's new moral ethos contrasts with his own personal behavior over the years.

Duke, to put it simply, was widely regarded a "horndog" on the prowl among the white supremacists and other far-right extremists he at one time claimed to lead. Indeed, he essentially abandoned his first family, including his children, in the process. 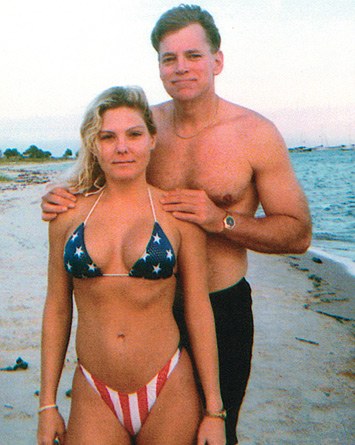 Others in the racist movement angrily responded to what would soon become Duke's notorious womanizing.

"I idolized Duke when I was younger. I looked up to him," the Rev. Johnny Lee Clary, who served as Duke's bodyguard in the late 1970s but later became an anti-racist activist, said in an interview. "He would get up and wave the Bible around and talk about Christian values. But when I got to know him on a personal level, I saw what he was really like, and it disgusted me. ... I traveled alongside Duke and I watched him at work. I saw him take a Klansman's wife to his hotel room."

Duke, then a married man with two children, pursued female sex partners so avidly and so openly that it embarrassed many of his closest colleagues. [Tom] Metzger, then Duke's state leader in southern California, became livid when Duke showed up for a 1977 Klan anti-immigrant "border watch" stunt and immediately started hitting on women.

"We used to tell people, 'When Duke comes to town make sure your wife is safely locked up and don't let him near your daughters,'" Metzger recalled.

As SPLC reported, Duke even later went on to write, under a pseudonym, a sex manual for women -- with most of the advice focusing on female submissiveness. No doubt Dr. Freud would have found that interesting.