Editor’s note: Since this story was published, authorities have revised their suspicions that the suspect was carrying out an attack aimed at all Muslims. In fact, it turns out that Roger Stockham is an American convert to Sunni Islam, and reportedly was angry at the mosque in question because it was Shi’ite.

A 63-year-old Southern California man who reportedly has “a long history of antigovernment activities” was arrested in a car laden with explosives outside one of the nation’s largest mosques, the authorities said Sunday. More than 500 members of the Dearborn, Mich., mosque were attending a funeral service at the time.

Police said Roger Stockham was arrested last Monday, Jan. 24, in the parking lot of the Islamic Center of America, where he’d apparently driven from California in a vehicle filled with M-80s and other illegal explosives. He was arraigned last Wednesday on charges of making a terrorist threat and possessing explosives with unlawful intent. The charges carry possible prison sentences of 20 and 15 years.

The apparent anti-Islam terror plot comes after a year of apparently increasing hatred directed at Muslims in America. That was most obvious last August, when a national controversy erupted over a planned Islamic center in Manhattan, stoked by politicians like Newt Gingrich, who compared Muslims to Nazis. More recently, U.S. Rep. Peter King (R-N.Y.), the new chairman of the Homeland Security Committee, announced plans for February hearings into “radical Islam.” King has said there are “too many mosques” in the United States and this January claimed that “80% of the mosques in this country are controlled by radical imams.”

Ibrahim Cooper, a spokesman for the Center for American-Islamic Relations (CAIR), said in December that King had a long history of such remarks, “and that’s exactly what we don’t need at a time when anti-Muslim sentiment is growing.”

A local CAIR official told The Detroit News that he had learned from police that Stockham had been drinking in a Detroit bar earlier in the day of his arrest. He allegedly threatened to harm a mosque in Dearborn, and was followed outside the bar by an employee who gave police his license plate number. A search then began, although Dearborn Police Chief Ronald Haddad said a 911 call from a local resident tipped off police to Stockham’s presence. Haddad told The Associated Press that Stockham had a history of antigovernment activities but did not elaborate.

Dearborn is home to one of America’s largest Muslim communities, and the targeted mosque there is huge — 70,000 square feet with a 150-foot dome height and 10-story-tall minarets, according to The Detroit News.

Stockham, who reportedly left his home in Imperial Beach, California, some weeks ago, was described as an Army veteran who stayed to himself. The Detroit News found Internet postings where Stockham said he had joined the Army in 1965 and served in an assault helicopter company in Vietnam in 1968.

The level of anti-Muslim hate crimes in the United States appears to have fluctuated in response to both events and the reaction of national leaders. Such crimes were at very low levels until 2001, when they skyrocketed by some 1,700% immediately following the 9/11 attacks. But President Bush gave a number of important speeches in the aftermath of the attacks, saying that America’s enemies were not Muslims or Arabs, but only the Al Qaeda terror networks. Very likely as a result, anti-Muslim hate crimes plummeted the next year by almost 68%. 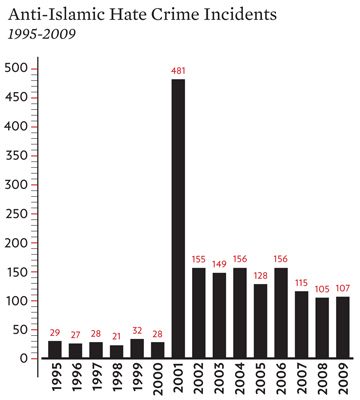