Taylor Rose, with the Liberty University chapter of the far-right campus student organization Youth for Western Civilization, is slated to appear at an international anti-Islamic demonstration called the "March for Freedom" in Cologne, Germany, on May 7, where he has pledged to give a speech.

The Cologne march is a yearly event sponsored by Cities Against Islamization, a coalition of various far-right groups, some of whose members have been officially declared extremist by European governments. Its members regard Islam as a quasi-fascist ideology and claim that Europe is in danger of being overrun by Muslims. They argue that European civilization is in danger of extinction through mass immigration, multiculturalism, and Islamization. The march in Cologne has led to violent clashes in the past between marchers and protestors. The group has also held protests in European cities against the Park51 mosque project in Lower Manhattan. 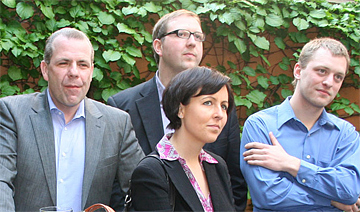 In early April, Rose (above, far right) also met in Antwerp with members of the far-right Belgian political party Vlaams Belang at one of the party's congresses. He was photographed there with members of PRO NRW (NRW means North Rhineland-Westphalia, a German state) and PRO Köln (City of Cologne), both of which are classified as "right-wing extremist" by German authorities. Members of the far-right anti-immigration and anti-Islamic German Pro-Bewegung (Pro-Motion) movement were also in attendance.

The Vlaams Belang advocates for the independence of Flanders from Belgium, strict limits on immigration, and also opposes multiculturalism. In 2004, the party, then known as Vlaams Blok, was found to be in violation of laws against racism and xenophobia. It disbanded and re-formed as Vlaams Belang, changing its platform to comply with the law. Members of Vlaams Belang have traveled in the past to meet with American hate groups, including the Federation for American Immigration Reform.

The March for Freedom blog referred to Rose as a "representative of the Tea Party" (he has appeared at one known Tea Party protest, in 2010) and "chapter chairman of Youth for Western Civilization." Issues discussed at the Antwerp meeting included immigration policy, Islamization, and what the European attendees considered their threatened freedom of expression because of anti-racism laws in Europe.

Youth for Western Civilization, a student group that opposes multiculturalism and "political correctness" on campus and claims immigration will destroy America, says its mission is to "preserve the values of Western civilization." Founded in 2006, it has since grown to include chapters at several U.S. universities, including Liberty, American, University of North Carolina, Washington State, Vanderbilt, and the University of Connecticut-Storrs. The Providence College chapter was denied official recognition from the campus, but it is active. The Boise State chapter is in the process of getting official recognition.

Rose is fluent in German and is currently pursuing a B.A. at the Jerry Falwell-founded Liberty University in international relations with a minor in strategic intelligence. He blogs about the dangers of Islam at the YWC site, and he protested the Park51 mosque in Lower Manhattan on Sept. 11, 2010.