Over the past month, New York City real estate mogul and TV reality show host Donald Trump has turned himself into the nation’s biggest promoter of the alleged “controversy” over President Obama’s nationality. He claims to have ordered investigators to scour the globe in search of records of the president’s birth and, for good measure, now even questions how Obama, who he called "a terrible student," got into Harvard or if he ever attended. 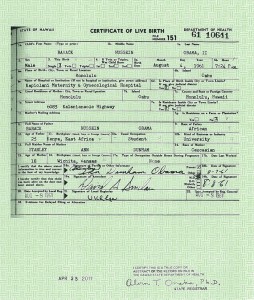 Just this Monday, Trump appeared on CNN, the latest in a series of self-promoting public appearances, to insist that the president’s birth certificate does not exist. He said to host Anderson Cooper: “I’ve been told very recently, Anderson, that the birth certificate is missing. I’ve been told that it’s not there, and it doesn’t exist.” Pressed by Cooper to identify his sources — or even some of the officials his investigators have supposedly talked to — Trump refused to provide a single name.

But Trump’s little game may have been checkmated today.

This morning, the Obama Administration released what has long been described as the missing puzzle piece by the so-called “birther” movement – his “long-form” birth certificate. The certificate notes that Barack Hussein Obama was born on Aug. 4, 1961, at Kapiolani Maternity & Gynecological Hospital in Honolulu on Aug. 4, 1961. His parents are identified on the certificate as Stanley Ann Dunham, born in Wichita, Kan., and Barack Hussein Obama, born in Kenya — precisely what the president has said clearly for his entire life. During his news conference, Obama referred to Trump, although not by name, as a "carnival barker."

But that didn’t slow down The Donald. Ever an adorer of the limelight, Trump held a news conference this morning in New Hampshire to congratulate himself for ending the supposed controversy that actually had been repeatedly debunked by news organizations — not to mention the fact that Obama’s birth in Hawaii was announced in the Honolulu Advertiser in 1961. “Today,” a boastful Trump intoned, “I’m very proud of myself, because I’ve accomplished something that no one else has been able to accomplish.” Still, the man who has led several companies into bankruptcy while claiming to be a genius businessman wasn’t 100% convinced. “I want to look at it,” Trump said of the certificate, “but I hope it’s true.”

Conspiracy theories surrounding Obama’s birth certificate have painted the president a “Manchurian candidate” of sorts, some kind of sleeper agent placed years ago by foreign, often “Islamic,” interests that now have finally managed to seize control of the nation’s highest office. Major political figures including conspiracy theory-mongering U.S. Rep. Michelle Bachman (R-Minn.) have questioned the president’s nationality (although even she backed off slightly in recent days). Right-wing attack dog Jerome Corsi — best known for his “Swift Boat” twisting of the Vietnam war record of then-presidential candidate John Kerry — wrote two books questioning the Obama story, one of them going on sale this May 17. (No word yet on whether the title — Where’s the Birth Certificate? The Case That Barack Obama is not Eligible to be President — is facing any changes.) In his first book, Corsi claims without any evidence that the president’s autobiography was “most likely written by Bill Ayers,” a one-time member of the extreme-left Weather Underground.

Polls have shown huge numbers of Americans have been taken in by these fairy tales. This March, a Harris poll found that 25% of respondents believed Obama was not born in the U.S. Last July, a CNN poll found that 27% doubted Obama was born in the U.S. or were certain that he was not. All polls have shown that these beliefs are far higher among Republicans than Democrats.

The release today of the certificate presumably will change some of these people’s minds, and make clear that many of the president’s critics are simply lying.

In a public statement this morning, Obama said he hopes the nation can now finally move beyond this issue. “Over the last two and a half years, I have watched with bemusement,” he said in brief remarks. “I’ve been puzzled by the degree to which this thing just kept on going.” Obama acknowledged there would be a “segment of the people for which, no matter what we put out, this issue will not be put to rest,” and ended with a blunt chastisement of those who continue to press the issue. “We do not have time for this kind of silliness,” he said.