The New York Times today published an article about David Barton, a self-educated, pseudo-historian who advises several prominent right-wing political figures, including Newt Gingrich, Michele Bachmann, Mike Huckabee and Kansas Gov. Sam Brownback. Huckabee, in fact, recently said at a religious-right conference that he wished all Americans could be “forced — forced at gunpoint no less — to listen to every David Barton message, and I think our country would be better for it.”

Named by Time as one of the nation's 25 most influential evangelical Christians in 2005, Barton is best known for peddling historical distortions promoting his view that America was founded as a Christian, rather than secular, nation. He served as vice chairman of the Texas Republican Party from 1997 to 2006, and he was hired in 2004 by the Republican National Committee to mobilize Christians for President George W. Bush’s re-election campaign. Since then, he has also become Glenn Beck's unofficial "historian" (Barton and Beck below, recently in Israel). 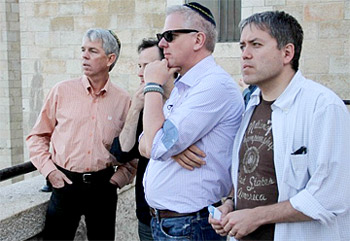 Times reporter Erik Eckholm noted that Barton “has steadily built a reputation as a guiding spirit of the religious right” even as many historians say he relies on flawed research. What the article didn’t reveal is the depth of Barton’s extremism.

Last month, People for the American Way released a report examining Barton’s role in the religious right and Republican politics. Barton, who often promotes conspiracy theories about elites hiding "the truth" from average Americans, subscribes to beliefs found in Seven Mountains Dominionism. This movement teaches that certain kinds of Christians are meant by God to dominate every sphere of society.

Barton has warned about the dangers of Islam but claimed that "secularism presents a greater threat to American traditions and values than does Islam" and that the Constitution was not meant to be a secular document. He has battled marriage equality and has campaigned for state restrictions on legal equality for LGBT people. He has involved himself in the new war on unions, claiming that Jesus and the Bible oppose minimum wage laws.

He has also been extremely active in the religious right's campaign against so-called "activist judges." His 2003 book Restraining Judicial Activism calls for the impeachment of federal judges who don't interpret the Constitution the way he does. In addition, he says, members of Congress should use the threat of impeachment to intimidate federal judges.

Here are some other notable Barton activities:

Barton has made a career for himself with myths and misinformation. And as People for the American Way notes, he and his work distort history and the Constitution for political purposes. He encourages religious divisiveness and feeds a political climate in which opponents are labeled "evil" and "anti-God." His vision of America holds little promise for people unlike him.