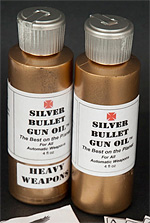 UPDATE: The manufacturer of Silver Bullet Gun Oil, who goes by the name Midnite Rider, contacted Hatewatch late last night in response to an interview request. In the brief E-mail exchange that followed, he continued his attack on Islam and refused to reveal his identity. “I don’t have 24 hour full security detail like our president,” he wrote. In response to concerns the story raised, his only reply was that he hoped his gun oil would offend Muslims. “It is designed as an affront to an entire belief structure,” he wrote. “You have seen what the people this oil is designed for did to folks who draw simple cartoons or burn certain pieces of paper, right? Benefiting mankind does not exempt one from the wrath of the insane.”

A mysterious company called Silver Bullet Gun Oil has begun selling a line of products for automatic weapons that allegedly contains 13% liquefied pig fat for the expressed purpose of killing Muslims and denying them “a place in paradise,” Hatewatch has learned.

“No longer is paradise guaranteed to the so-called ‘Martyrs’ who die for Allah,” one YouTube video advertisement proclaims in text. “You are fools, on a fool’s mission. Lied to and led by False Prophets and Cowards. … You cannot win, and Will be consigned to Allah’s Hell for eternity if you die from a weapon using Silver Bullet Gun Oil!”

Consumption of pork is forbidden in Islam. So the belief behind the oil is that a person killed with a bullet that travels down the barrel of a gun greased in pig fat would be desecrated. Even if the gun oil is never used, the manufacturer boasts, its mere existence will terrorize Muslims and result in an effective “counter-Islamic terrorist force multiplier.”

It could also provoke violent backlashes from Muslims who feel their faith is being attacked. In early April, at least 20 people were killed in riots in Afghanistan provoked by Terry Jones, a Florida pastor who burned a Koran.

The oil’s manufacturer goes by the nom de guerre, “Midnite Rider – Servant of Yahweh,” an Old Testament name for God, but his real identity is unknown. Despite that anonymity, several things are clear: the oil is being marketed to soldiers and Marines deployed to Iraq and Afghanistan, and it is designed to amplify the kind of anti-Muslim sentiment spread by such groups as Brigitte Gabrielle’s ACT! for America, Pamela Geller’s Stop the Islamization of America, and others.

Hatewatch recently purchased several bottles of the gun oil to determine if the company was real. The gun oil arrived in a box postmarked from Courtland, Va., a town of about 1,300 people 50 miles southwest of Norfolk. Included with the gun oil were decals and playing cards – the ace of spades printed with the words “One Shot, One Soul” to put on the bodies of dead Muslims. Also included in the package was a biography of a World War I American general who supposedly executed 49 Muslims in the Philippines with bullets soaked in pig’s blood.

Midnite Rider makes the dubious claim that police tactical teams and “many members” of all U.S. military branches use the oil. It could not be determined if there is any truth to this claim. He continues: “Many, many of allah’s [sic] misfits, murderers and morons have been turned away from his gates of ‘Paradise’ due to their stench of swine,” he brags. Hatewatch today sent a message to the manufacturer through its website seeking comment, but did not immediately receive a response.

Several testimonials on the site are attributed to military members offering reviews of the product. One, written by a man identified as “Matt M,” begins, “Midnite Rider, you are a [sic] honest to goodness 100% USDA, grade AAA shining F------ GENIUS. … This is the most brilliant mind f------ warfare idea I’ve ever seen.” Another testimonial is attributed to a supposedly moderate Muslim soldier. “Your product is great,” he writes. “Old school propaganda type shit with teeth.”

It is also impossible to determine if the testimonials are real, or if the company has made any sales directly to military personnel, but several online forums for firearms enthusiasts touted the oil. Boyd Collins, a civilian spokesman for the U.S. Army Materiel Command, which oversees the Army’s equipment, said he had never heard of the gun oil, though he conceded that a soldier or Marine could theoretically purchase the oil on his or her own and use it on the battlefield.

Since the war in Afghanistan began in October 2001, a number of companies have sold products to soldiers that have painted the U.S. military as party to nothing less than a holy war. Last year, the U.S. military was criticized after purchasing riflescopes from Trijicon engraved with Bible passages. Also last year, a military veteran who worked at Camp Lejeune, N.C., was turned away from post because his car was emblazoned with anti-Islamic decals, including a sticker that said "ISLAM = TERRORISM."

Advertisements for the oil appear prominently on the webpage of the Arizona Citizens Militia (ACM), a border militia the Southern Poverty Law Center lists as an antigovernment “Patriot” group. ACM said the advertisements were placed there arbitrarily, but declined to comment further.

Midnite Rider offers a glimpse for his rationale behind creating the oil – and brags about covertly selling thousands of bottles since 2005 – in an essay titled “Political Correctness, Refuge of the Weak.” “If you do not put forth a strong front, instilling fear of retribution for acts of terror, you will be perceived as having weakness which can and will be exploited.”