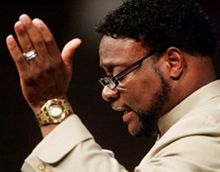 Bishop Eddie Long, a virulently anti-gay Georgia pastor who heads one of the nation’s largest megachurches, has reached a settlement with four men who accused him of abusing his role as pastor to compel them into sexual relationships when they were teenagers.

The Atlanta Journal-Constitution reported today that the case likely will be dismissed “with prejudice,” meaning Long cannot face another lawsuit stemming from the same allegations. While the terms of the settlement were not released, both parties have been in mediation for months. Long’s New Birth Missionary Baptist Church said the decision to settle was made “to bring closure to this matter and allow us to move forward with the plans God has for this ministry.” B.J. Bernstein, the lawyer representing the plaintiffs, declined to comment.

Long came to the attention of the Southern Poverty Law Center in 2007 as one of the most virulently homophobic African-American leaders in the religiously based anti-gay movement who, along with other prominent clerics, embodied black religious resistance to LGBT rights. In a videotaped sermon once for sale in the church bookstore, Long denounced homosexuality and attributed perceived problems with Western culture to blurred gender lines. “The problem today, and the reason society is like it is, is because men are being feminized and women are being masculine! You cannot say, ‘I was born this way.’ … I don’t care what scientists say!”

The allegations of sexual misconduct were first announced last September. The men – Anthony Flagg, Spencer LeGrande, Jamal Parris and Maurice Robinson – accused Long of using his role as pastor to coerce them into sexual acts in exchange for cars, clothing, jewelry, electronics, college tuition and extravagant overnight trips to New York, Las Vegas, the Caribbean, New Zealand and other places.