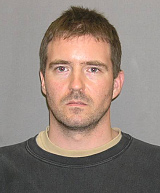 , who operates a leading Internet hate forum called Vanguard News Network, is expected to be subpoenaed by the Justice Department as a prosecution witness in the trial of a man accused of planting a potentially deadly bomb on the route of a Martin Luther King Jr. “unity parade” in Spokane, Wash.

Linder may be subpoenaed to answer questions about email exchanges and 1,139 postings made on the VNN forum by Kevin William Harpham (right), who used the moniker “Joe Snuffy” on the Web site while posting racist comments and seeking bomb-building advice, First Assistant U.S. Attorney Tom Rice said at a pretrial hearing Thursday.

Linder and Harpham both have past ties to the National Alliance, once regarded as the most-dangerous neo-Nazi organization in the United States.

The FBI has recovered digital pictures Harpham took at the January unity parade, including photos of him and close-ups of African American children and a Jewish man wearing a yarmulke who marched in the parade, it was revealed at the hearing. Those individuals, likely identified during the massive FBI terrorism investigation, also could be called as witnesses as part of an expected prosecution effort to put faces on Harpham’s intended hate crime victims.

Hundreds of parade marchers were re-routed after the bomb – made with fishing weights and shrapnel dipped in rat poison – was discovered on the route and successfully disarmed, leaving behind a pile of forensic evidence.

Following Harpham’s arrest, FBI agents later recovered a second improvised explosive device, powered by potassium nitrate, they believe he made and abandoned in a gravel pit near his home, before building the parade bomb containing black powder, Rice told the court.

The FBI now has DNA evidence linking Harpham to at least one of the bombs.

The details are the first to surface in the 6-month-old investigation marked by sealed court filings and secret, closed-courtroom proceedings.  At least one-fifth of the court documents filed in the case, including the initial criminal complaint used to justify Harpham’s arrest, remain under seal and are not accessible to the public.

Even a portion of Thursday’s federal court hearing was closed to the public while the judge heard testimony from two FBI agents who reportedly obtained statements from Harpham before he formally received his Miranda warnings on the day of his arrest.

It wasn’t immediately known if the judge would allow a jury to hear about Harpham’s post-arrest statements at his trial now set for Aug. 22. At the outset of Thursday’s hearing, Assistant Federal Defender Kimberly Deater asked the judge to close the entire proceeding intended for court rulings on what evidence would be excluded from the trial, but Quackenbush said there was no reason to exclude the media and spectators.

To help convince a jury of Harpham’s state of mind and intent when he allegedly built and planted the bomb, prosecutors said they intend to introduce at trial several of the defendant’s personal postings on the VNN web site, Rice told the court.  The prosecutor didn’t elaborate in court, but the VNN site administrator would be subpoenaed presumably to verify the authenticity of those postings and emails he exchanged with Harpham.

Those VNN postings are intended to prove Harpham really is the individual behind the “Joe Snuffy” postings, that many are virulently racist, including frequent use of the “n-word,” and a third category where he seeks help with bomb making, Rice said.

Going through a lengthy list of those blog postings, which remained sealed from public view, the judge said he would grant a defense request to suppress from introduction at trial any of Harpham’s anti-Jewish, or anti-Semitic arguments. The judge said he would suppress Harpham’s anti-Semitic remarks posted on the VNN site “because they are more religious than racial views.”

“Any racial animus, any anti-Semitic views (expressed by Harpham) would be much more prejudicial than relevant” during the trial, the judge said, explaining his rulings were intended to ensure a fair trial.

When the judge said there was no evidence that the bomb was placed for any reason other than racial prejudice and was intended for African Americans on the MLK holiday, the prosecutor said Harpham clearly had racist views aimed at others besides black people. The prosecutor, at that point, told the court the FBI had recovered pictures Harpham had taken of a couple of young black children at the parade and a “Jewish gentleman” wearing a yarmulke.

When the judge said it was opinion that the Martin Luther King Day parade – the intended target – largely was about African Americans, the prosecutor responded by telling the court that Harpham also expressed anti-Semitic and antigovernment views, and publicly posted those comments on the VNN site.

The judge said he would allow use of  “Joe Snuffy” postings, ranting about gays and abortion and another referring to ZOG – the Zionist Occupied Government -- but ordered deletion of others making reference to Christians and Jews, and Doc Marten’s red boot laces (a symbolic favorite of neo-Nazi skinheads), Jewish bankers and the role of a “lone wolf.”

At one point on the VNN forum, Harpham asked for guidance in bomb-building, expressing his personal disappointment that The Turner Diaries, which he had just purchased and read, didn’t offer and ready-made formulas to construct such destructive devices, Rice said.

Statements from prosecutors at Thursday’s day-long hearing painted a picture of a “lone wolf” racist, who belonged to the National Alliance and once flirted with the idea of joining the Aryan Nations.

The 36-year-old unemployed former soldier and electrician is charged with attempted use of a weapon of mass destruction, possession of an unregistered destructive device and use of a firearm in relation to a crime of violence. He also is only the third person to be charged by the Justice Department with a federal hate crime for allegedly violating provisions of the Matthew Shepard and James Byrd Jr. Hates Crimes Prevention Act signed into law in October 2009.