Human Events, a conservative magazine once described as Ronald Reagan’s favorite reading, published an article today entitled “The Truth about the Oath Keepers.” It detailed the group, which is mainly made up of law enforcement officials and military veterans who promise to re-swear their oath to defend the Constitution, and also the criticisms made of it by the Southern Poverty Law Center.

The article, by student and regular Human Events contributor Kathryn M. DeLong, certainly comes down on the side of the Oath Keepers, but it does quote me at some length and reasonably accurately. What’s remarkable is what it doesn’t say.

DeLong, who heads her College Republican Club at the State University of New York at Buffalo, spoke to me on Aug. 5, when I returned her call. At first, she asked questions any reporter might. But when I explained that the group’s “10 Orders We Will Not Obey” really relate to its beliefs in classic “Patriot” conspiracy theories — the idea that the government plans to impose martial law with the aid of foreign troops and imprison all those who resist, among others — she scoffed. We went back and forth until I finally told her that was our opinion, period. She insisted several times that she was just an objective reporter playing “devil’s advocate” with me.

A few minutes after we spoke, at 2:55 p.m. Aug. 5, DeLong tweeted her Twitter followers this message: “Wow. F--- the Southern Poverty Law Center.” That was followed by at least three replies to followers who apparently asked her for details. One of them said “you’ll have to read my article to find out.” 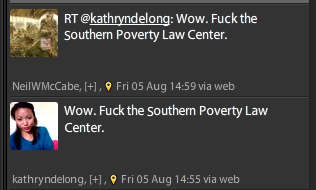