Move over, Glenn Beck. The amusingly misnamed Accuracy in Media, a far-right organization that generally spends its time defaming gay people and all things on the political left, yesterday published an exhaustive, and exhausting, report that purports to unmask a Latino rights organization. And it makes the former Fox News host’s famous blackboard look downright simple.

The new “report” was written by James Simpson, identified as a former Office of Management and Budget analyst who also freelances for far-right publications like FrontPage Magazine and Soldier of Fortune. It purports to show that “the company associated with Gustavo Torres and CASA de Maryland comprises a who’s who of the radical left.” CASA, it says, is “of a piece with all other American organizations of the far, far Left.”

If you want to actually read it, you’ll have to wade through about 18 pages of mind-numbing accusations, insults and a blizzard of alleged links to people and organizations that Simpson and Accuracy in Media believe are scary indeed. We took the easy way out, just studying a spectacular spaghetti bowl of links and ties that Simpson diagrammed to make his point. It’s all there, the connections between George Soros and the Communist Party USA and the AFL-CIO and ACORN and the Obama Administration and… well, you get the picture. 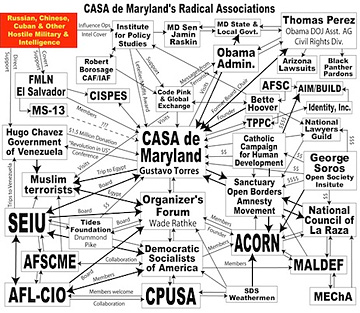 And in the unlikely event that you still haven’t been fully illuminated on the threat posed by CASA, Simpson has some soothing words for you. In the next few weeks, he says, he’ll be releasing even more explosive materials “that could not be included due to space constraints.”

Apparently, some things are too much even for Accuracy in Media.