During the 1990s, as many recall, the “black helicopter” became a symbol of the antigovernment “Patriot” movement’s unshakeable paranoia and cartoonish insistence that the choppers would soon be coming after those freedom-loving dissidents who knew the truth about the New World Order.

Well, the helicopters are back.

But technology has advanced a bit in the years since the last Patriot boom. Now, the machines are even scarier: They’re smaller, remote-controlled versions that swarm over our cities and can take out a constitutionalist with a single Taser shot.

As we would expect, the scoop was obtained by Alex Jones, the professional conspiracy theorist who hosts a radio show from Austin, Texas. On Monday, he dedicated a portion of his online broadcast to news reports that the sheriff of Montgomery County, Texas, had used a federal grant to buy an Unmanned Aerial Vehicle (also known as a drone) called the ShadowHawk. The laptop-controlled, miniature helicopter comes equipped with a powerful zoom camera, infrared heat-seeking optics and crowd-stopping cartridges. 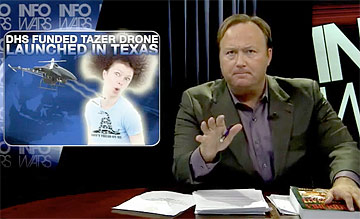 For Jones, this isn’t just another story of police departments adopting the technology of the day – it’s a glimpse at the insidious machinery that agents of the New World Order are deploying in the night skies in advance of martial law.

“They’ve got large unmanned drones,” Jones warned. “They’ve got small drones. … And they’ve got million-dollar systems up there flying around with cops in control of them, surveilling you. And now they’re mounting them with ground-penetrating radar that looks right through your wall, while you’re on the toilet, having sex with your wife.”

Jones and Patriots everywhere might be alarmed to know that police department in California and Florida have been using similar drones for five years. (Pity to the people whose bedrooms and bathrooms are under constant surveillance.)

The new gizmos notwithstanding, these are fears that have long lived in the nightmares of Patriots.

Former Militia of Montana leader John Trochmann regularly claimed in the 1990s that black helicopters were scouting the United States to lay the ground for a United Nations takeover. Linda Thompson, an Indianapolis attorney who peddled the myth that the 1993 siege of the Branch Davidian compound was orchestrated by nefarious global elites, frequently professed that black helicopters followed her whenever she left her house.

On Monday, Jones had a warning to the shadowy forces behind this latest threat to freedom:

“We’ve woken up to you. But if it does come to martial law and physical oppression in this country, the American people aren’t going to sit in our farm houses and wait for you cowards to come kill us with your unmanned drones and your combat mech-robots. … It’s time for the system to realize all this electronic crap isn’t going to protect you from the people you have abused and murdered and killed. Ideas are bulletproof.”