There was a time, not so long ago, when Lamb and Lynx Gaede, daughters of an infamous Montana neo-Nazi, were considered the next big thing in the white supremacist movement. They were blonde, blue-eyed teenagers given to swastikas and Hitler worship, and they formed a white-power musical group called Prussian Blue, named after the color of Zyklon B residue in the Nazi gas chambers.

But then the twins grew older, rejected the views of their mother April Gaede, took up for the medical marijuana that alleviated their serious medical conditions, and said they’d come to “a place of love and light.” “We’re healers,” is how Lamb put it. “We just want to exert the most love and positivity we can.”

Could Derek Black be headed down the same road? Or is the son of Don Black, the former Alabama Klan leader who runs the racist Stormfront forum from his home in West Palm Beach, Fla., trying to have it both ways?

The evidence is mixed. But Derek Black, who has engaged in racist activism in the past, in recent weeks posted a remarkable statement on a students-only Web forum at the elite New College of Florida, where he is in his third year. 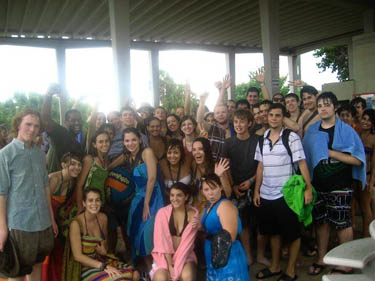 Derek Black, far left, stands with his fellow students at New College during his freshman year.

In it, he sought to respond to fellow New College students who had expressed fears of him, based largely on reports about his father’s views and articles about his own past racist activities, including one on the Southern Poverty Law Center’s (SPLC) website. He clearly said he is not a white supremacist, a neo-Nazi or a Klansman and does not hold such views. He said he doesn’t dislike anyone “on account of their race, religion, or anything similar.” “I do not believe people of any race, religion, or otherwise should have to leave their homes or be segregated or lose any freedom or whatever other terrifying similar-vein ideas have been posted in threads about me,” he said. “If anyone cares,” he added, “I’m also pro-choice (regulated by states), pro-gay marriage (with gov’t not defining marriage between people), and anti-death penalty (regulated by the states).”

Describing a 2008 episode in which he won election to the Palm Beach County Republican Executive Committee but was ousted because he failed to sign a GOP loyalty oath, Derek Black said he ran “based on the libertarian-ish views I hold (such as protection of personal liberty, no foreign wars without imminent threat), as well as regulation for environmental conservation and an inclination toward protection of domestic industry.” He said that although he had moderator privileges on Stormfront, by far the largest racist Web forum in the world, he does not exercise them.

Reached via E-mail by Hatewatch today, Derek Black confirmed that he had sent the statement to fellow students “in response to uncomfortable feelings about me some students at my college held. I had never publicly commented on the huge, heated threads about me.” But he added that he had not abandoned his view that white assimilation in a multicultural society is harmful to whites. “Everything I said is true,” he said of his statement to students, “and I also believe in White Nationalism. My post and my racial ideology are not mutually exclusive concepts, and people can believe both. WN [white nationalism] doesn’t dictate specific creeds so much as my concern about white assimilation, which I still think is very much a problem.”

Derek Black’s current political views, assuming his recent statement accurately reflects them, do seem to have moderated. By the age of 12, he had created a children’s page on his father’s website, complete with white pride songs and anti-Martin Luther King Jr. bedtime stories. At around the same time, he was profiled in a USA Today article and an HBO documentary, both about organized racism. He accompanied his father to large numbers of white supremacist events.

As late as 2010, when he had a radio show on WPBR radio in South Florida, his first scheduled guest was Gordon Baum — the head of the Missouri-based Council of Conservative Citizens, which has described black people as a “retrograde species of humanity” — a far cry from Derek Black’s claim that he dislikes no group. And just this September, he spoke at Stormfront’s “Practical Politics Seminar” in Gatlinburg, Tenn., on how to advocate for white people effectively. During the same month, he attended a meeting of the European American Leadership Seminar for the second year in a row. The SPLC plans to list the group as a hate group in 2013.

In his recent comments — his first public statement at the school on his politics — Black described some reaction to him at New College: “glares” at public lectures, “the occasional middle finger in the library,” a few “threatening emails.” But he concentrated on others’ fears of him, saying he’d heard “that people might be scared or intimidated or even feel unsafe” because of his purported views, and inviting students to E-mail him personally about his politics. “Making these statements obviously does not instantly create comfort or security for everyone who’s uncomfortable,” he concluded, “but I hope it might help slightly.”