Proud heterosexuals — a small and nameless handful of them, anyway – are on the march. And they’re not being very nice about it.

The page includes status updates, images and comment threads that range from mild to genuinely offensive. And though Dr. HAM told the Huffington Post in December that “I would like to say we are not about hate in any way,” the facts seem to pretty plainly belie him. HAM moderators have posted comments about “the gay agenda” and baselessly linked homosexuality to pedophilia. They have posted Photoshopped images like the one of a gay pride marcher whose sign has been altered to read, “My Butt Hurts.” One post compares the “fertile garden” of heterosexuality to the “toxic waste zone” of homosexuality. Another urges gay people to stop “acting like animals” and “evolve already.” HAM allows most anyone who agrees with it to post comments. But you will be banned, it says, if you post “accusations of racism” or if you call women derogatory names. Comments supportive of LGBT people do appear on the threads, but are typically followed by anti-gay responses.

Now the site has gone one further. On Tuesday, its administrators posted an image ostensibly meant to educate readers in “Recognizing Hate Symbols” so they can know “what to look for when confronted by anti-democratic forces which continue to threaten our civil society.” The first symbol is a Nazi swastika. The next symbol is a rainbow flag, a representation of gay pride. And the symbol after the flag is a white power logo. The next day, it posted a mocked-up image portraying a Nazi soldier flying a rainbow flag, along with the following tagline: “They have ways of keeping you silent. Know the dangers of the rainbow.” A HAM administrator exhorted readers to print out the picture out and hang it in public locations. 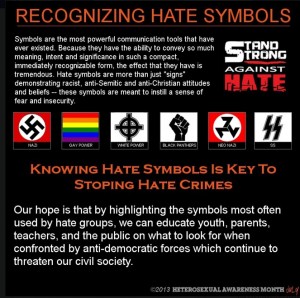 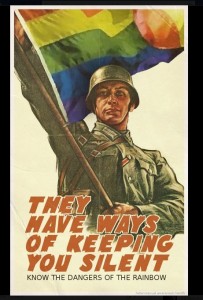 Also this week, one of the status updates referred to their opposition’s “benign but perverse agenda.” Earlier this month, HAM posted a photo of a gay pride event and claimed that one of the men on a pride float was pointing at his next child love interest. In yet another post, HAM claims that accepting homosexuality leads to affirming it, which then leads to “something more perverse.” Comments on that post include the claim that gay people endanger children. One explicitly — and without scientific basis — links homosexuality to pedophilia: “[G]ay ‘marriage’ equals gay adoptions. Gay adoptions equals many sexually abused children.”

In November 2012, HAM posted an image with the words, “Gay marriage is nothing more than a pain in the butt. Avoid butt pain. Support true marriage.” Another “tip” from the same month: “Heterosexual tip #953: A colon is not a uterus.” A post in December 2012 cross-posted an image meant to warn about “gay bowel syndrome,” terminology coined in the 1970s that is now considered both derogatory and medically incorrect among many medical professionals. Another post features an image of the late Dr. Charles Socarides, a former president of the NARTH group that claims that homosexuality can be “cured,” and his infamous quote: “Homosexuality is a psychiatric disorder, there is no question about it. It is a purple menace that is threatening the proper design of gender distinctions in society.”

There have been complaints to Facebook about this page, but the organization has declined to take it down. Under its Community Standards, Facebook states that it does not permit hate speech, and that it does “not permit individuals or groups to attack others based on their race, ethnicity, national origin, religion, sex, gender, sexual orientation, disability or medical condition.” Apparently, claiming that gays are pedophiles, sick, unnatural, perverted, and a danger to society and heterosexuals doesn’t meet those criteria, although Facebook did not respond to a request from Hatewatch yesterday to explain its thinking.