Colorado officials this morning are investigating the possibility that a white supremacist reportedly killed by police after a Thursday shootout and chase in Texas murdered the head of the Colorado Department of Corrections earlier in the week, The Denver Post reports. Tom Clements, executive director of the department, was shot dead on Tuesday after opening the door of his Monument home to a stranger. 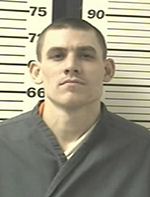 The apparent suspect was identified in several reports as Evan Spencer Ebel, a 28-year-old Denver parolee who was shot to death Thursday after first wounding a North Texas sheriff’s deputy and then crashing his car during a chase that reached speeds of over 100 mph. Officials told the Post and other Colorado news outlets that the Cadillac Ebel was driving is similar to a car that was described by witnesses as waiting outside Clements' home for about a half hour before the official was murdered.

Ebel was identified as a member of the 211 Crew, also known as the Aryan Alliance, a particularly vicious regional white supremacist prison gang whose size has been estimated at somewhere between several hundred and a thousand members, all in Colorado. A major, four-year racketeering investigation of the group culminated in 2005 with the arrests of 32 gang members and associates. One of them was Benjamin Davis, who started the gang in 1995, and was ultimately convicted of racketeering, assault and conspiracy and sentenced to 108 years in prison.

The 211 Crew may be most infamous for two of its members, Jeremiah Barnum and Nathan Thill, two men who were convicted of charges related to the 1997 bus-stop murder of Senegalese immigrant Oumar Dia. Dia was murdered, Thill once said, because he was “wearing the enemy’s uniform” — his black skin. Thill, who also shot and paralyzed a white woman who tried to help Dia, is serving a life sentence and Barnum, who was convicted of lesser charges, was killed by Colorado police when he tried to aim a gun at officers in a 2012 confrontation.

Officials have said that the 211 Crew was started by Davis initially after attacks by black inmates on white prisoners, but quickly morphed into a major criminal enterprise. Inmates seeking to join were reportedly required to attack someone selected by gang “shot callers,” and the only way out is to die. Once members were released from prison, they were required to earn money on the streets — dealing drugs and weapons trafficking, along with other criminal activity — in order to support gang members still in prison, who form most of the group, officials said.

A Department of Corrections official quoted by the Denver Post said officials are investigating if the murder of Clements was ordered by gang officials. “What’s not known,” the unnamed official told the paper, “is whether this was ordered or a crime of opportunity.” All Colorado prisons were placed on lock-down Tuesday night.

The case is the second recent episode in which officials suspect a criminal justice official may have been assassinated by a member of a white supremacist prison gang. On Jan. 31, Kaufman County, Texas, prosecutor Mark Hasse was murdered by one or two masked men as he walked from his car to the county courthouse. The men fled, but officials told The Dallas Morning News that Hasse had been “heavily involved” in prosecutions of members of the Aryan Brotherhood of Texas, and have been investigating that particularly vicious prison gang as a result.

The 211 Crew is known for its paramilitary structure, with members using titles like major, captain and lieutenant, and for elaborate verbal and written codes that all members are required to learn. Its members have murdered at least one fellow inmate and attacked many others. In a notorious case, a former Colorado prisoner was awarded $165,000 after he was extorted and repeatedly raped by 211 members while Department of Corrections officials reportedly did nothing to help.

The gang’s name, 211, comes from the California penal code for robbery. Members are often tattooed with “211” or a shamrock, after its founder’s Irish roots.

The chase Thursday began when a deputy with the Montague County, Texas, Sheriff’s Office tried to question Ebel in connection with an apparent drug deal. Ebel reportedly shot the deputy, who was wearing a bulletproof vest and survived, and a chase ensued. Ebel crashed his older model Cadillac after it was hit by a truck, then jumped out and began firing at his pursuers. He was shot to death.

Officials are also investigating whether Ebel was behind the murder of a pizza delivery man on Sunday in Colorado — a Domino’s delivery uniform shirt and a pizza box were reportedly found in his car after it crashed. Some officials reportedly suspect that delivery man Nathan Leon, 27, may have been killed by Ebel for his uniform, which Ebel may have then used to approach the home of Clements, the Department of Corrections official slain on Tuesday. Officials are also reportedly looking into the possibility that Ebel was behind still other murders.