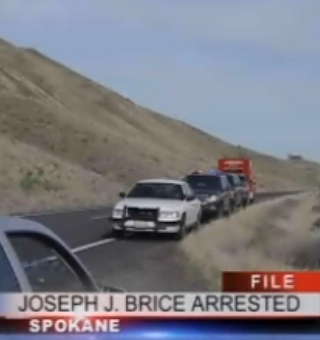 The federal investigation and prosecution of Joseph Jefferey Brice shines a spotlight on the antigovernment, anti-Semitic links shared between Islamic jihadists and white supremacists.

“Tim’s characteristics are nearly the same as myself, physically (and) politically,” Brice, 23, wrote in an Internet message posted on Jan. 14, 2010.

But the former “self-declared, conservative, right-wing Christian,” appeared to undergo a rapid radicalization to Islam after he nearly died on April 18, 2010, when an acetone peroxide ammonium nitrate bomb he built prematurely exploded near his rural home in eastern Washington.

Local sheriff’s deputies wrote that case off as a teenage prank and didn’t seek criminal charges, but federal investigators later became interested and launched an investigation after a backpack bomb attempt in Spokane in 2011.

“The actual nature and circumstances of manufacturing the ‘unregistered

Firearm’ … is nothing like lighting firecrackers in the driveway,” Assistant U.S. Attorney Russell Smoot wrote in a memo for the sentencing in U.S. District Court in Spokane.

Rather, the prosecutor said, the homemade bomb that left Brice unconscious for 12 days “was the result of years of internet research, experimentation

with dangerous chemical mixtures, and involving others in both the manufacturing process and the detonation of pipe bombs and chemical IEDs.”

Later, recovering from severe injuries, Brice became interested in Islamic extremists and attempted to communicate with members of that movement via social media, ultimately providing them with bomb-making formulas.

Brice wrote posts on a “I’m a Proud Terrorist” web forum and bragged that his “Strength of Allah” videos of bombings were some of the best and most-exciting posted on YouTube, court document say.

Brice pleaded guilty last September in U.S. District Court for the Eastern District of Washington to manufacturing an illegal explosive device and attempting to provide material support to terrorists.

After he was arrested by FBI agents on May 9, 2011, court documents disclose he struck up a jailhouse friendship and began communicating with Wayde Lynn Kurt, a neo-Nazi skinhead gang leader and Odinist implicated in a terrorist plot to kill President Obama. Kurt also boasted of carrying out “coon-hunting” racial attacks in the Pacific Northwest. Both Brice and Kurt were incarcerated for a time together as federal inmates in the Spokane County Jail.

Federal agents assigned to the Inland Northwest Joint Terrorism Task Force obtained warrants to search the jail cells of Brice and Kurt and seized a document suggesting “after their release from Bureau of Prisons custody, [Brice] and Kurt plan to associate together in possible future criminal conduct.”

Instead of labeling Brice as an Islamic jihadist convert or a white supremacist, Brice appeared more interested in a religion of  “violence and chaos,” according to federal investigators.

In arguing for a 15-year sentence for Brice, Smoot said the young man “does not appear to show remorse or contrition” and has “bragged about” his bombing-making prowess.

The defendant and his attorney told the court that he was “just joking with Islamic terrorists when, the day after U.S. forces killed Osama bin Laden, he posted on the Internet that now was the time to strike back at the United States.

Brice, an individual with a demonstrated interest and expertise in chemical explosives and violence, may have said he was just joking with the “terrorist,” but once he provided detailed formulas for making chemical-based improvised explosive devices, that expertise was no longer under his control,  Smoot said.

Dr. Gregory Saathoff, a board-certified psychiatrist, was prepared to testify as an expert witness for the government if the case had gone to trial. In a report, court documents say, he described Brice as “a chronic user and abuser of street drugs, with a significant history of risk-taking behavior, and an interest in bomb-making, the use of deadly poisons, and a demonstrated disregard for human life.”

Further, the psychiatrist said Brice “is a covert, clandestine individual who plans violent, criminal enterprises and the use of diversionary tactics.”