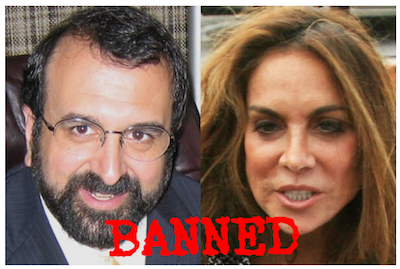 Two of America’s most vociferous anti-Muslim activists have been banned from Britain as extremists after the home secretary determined their presence “would not be conducive to the public good.”

Pamela Geller and Robert Spencer, co-founders of Stop Islamization of America (SIOA), had planned to attend a rally being organized by the anti-Muslim extremist group English Defence League (EDL) on Saturday in Woolwich, where British soldier Lee Rigby was brutally murdered last month by two men who said they were avenging the killings of Muslims by the British military.

British authorities confirmed to Agence France-Presse, the French news agency, that “Pamela Geller and Robert Spencer are subject to an exclusion decision.”

On her website, Geller posted a June 25 letter from the Home Office of the United Kingdom informing her that she is no longer welcome in the UK. “The Home Secretary has reached this decision because you have brought yourself within the scope of the list of unacceptable behaviours by making statements that may foster hatred which might lead to inter-community violence in the UK,” the letter says.

The letter notes that Geller founded SIOA, “an organization described as an anti-Muslim hate group.” (The SPLC, publisher of this blog, has listed SIOA as a hate group since 2010.) The letter also cites two of Geller’s statements:

According to the letter, foreigners may be banned for expressing views that   foment or justify terrorist violence in furtherance of particular beliefs; seek to provoke others to terrorist acts; foment other serious criminal activity or seek to provoke others to serious criminal acts; or foster hatred which might lead to inter-community violence in the UK.

In his manifesto, the Norwegian anti-Muslim terrorist Anders Breivik, who slaughtered 77 of his countrymen in July 2011, drew inspiration from Spencer’s work, citing him dozens of times. “About Islam I recommend essentially everything written by Robert Spencer,” Breivik wrote.

EDL leader Tommy Robinson (aka Stephen Yaxley-Lennon) described the decision by Britain’s home secretary as “embarrassing” and insisted the duo were coming to Britain to lay flowers at the site of the soldier’s murder.

Spencer, author of the blog, Jihad Watch, said the “British government is behaving like a de facto Islamic state. The nation that gave the world the Magna Carta is dead.”

Being banned in Britain should not be a shock to the pair, especially after Robinson illegally entered the U.S. in January to speak at an SIOA event.  Robinson was detained by authorities for trying to enter the country with a fake passport in the name of Andrew McMaster. Somehow, the Brit eluded authorities and made his way to Manhattan where the event was being held. After returning to England the next day with a passport in yet another name, Paul Harris, he was arrested and eventually spent 10 months in prison for trying to illegally enter the U.S. This was the second time Robinson was denied entry to the U.S. He was turned back in June 2011 because of his EDL ties.

On another international front, several Australian news sources have reported that the West Australian police commissioner has promised to monitor all incoming and outgoing E-mail for anti-Muslim content. Western Australian law imposes criminal, but not civil, sanctions against vilification. According to one reporter, “The country’s criminal code was amended in 1989 to criminalize the possession, publication and display of written or pictorial material that is threatening or abusive with the intention of inciting racial hatred or of harassing a racial group.”