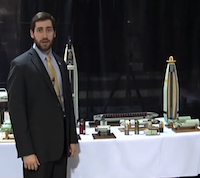 The U.S. Army is not commenting on its decision to suspend with pay one of its chemical and biological research engineers while he is investigated for his reported close ties to two racist groups espousing white nationalist views.

John Stortstrom, a mechanical engineer who worked for the Army at its Edgewood Chemical Biological Center (ECBC) in Maryland, was suspended May 28 after published reports disclosed he was among 150 white nationalists who attended the American Renaissance conference in early April in Tennessee. American Renaissance is a journal dedicated to race and intelligence, with a heavy focus on the “psychopathology” of black people. Its editor has written that black people are incapable of sustaining any kind of civilization.

Stortstrom also has been a member of Youth for Western Civilization (YWC), a far-right student group started about five years ago that now appears to be defunct.  Simultaneously, Stortstrom served as vice president of the Route 40 Republican Party Club, based in Edgewood, Md., which recently sponsored an appearance by Matthew Heimbach, president of the racist White Student Union at Towson University.

Stortstrom’s racist affiliations were first reported by the anti-racist organization “One People’s Project” (OPP). The group’s site included a photo of Stortstrom with the caption, “Engineer. Republican. Racist. Military bomb maker.” His racist affiliations — while he works with a security clearance at a U.S. military chemical and explosive facility — subsequently were explored in articles that appeared on Hatewatch and Salon.com.

Stortstrom was put on administrative leave, with pay, on May 28 as a result of the article published on SPLC’s Hatewatch blog, ECBC spokesman Don Kennedy told The Baltimore Sun for a story published on July 4.

“Kennedy would not give any more details about the allegations against Stortstrom, except to say the investigation is ongoing,” the newspaper reported.  The spokesman “also declined to comment on any free speech implications of the action taken by the ECBC.”

“An article came out in the Southern Poverty Law Center and it got back to management, and obviously an investigation was put under way and he was put on administrative leave,” Kennedy is quoted as telling the newspaper.

The newspaper reported that Stortstrom did not respond to E-mail and phone requests for comment, and also declined comment when reached through an acquaintance last week.

On a YouTube video that was publicly available in May, he said his job at the Aberdeen Providing Ground is “to provide engineering and chemical expertise to customers in support of obscuration, non-lethal, riot control and incendiary munitions.” It wasn’t clear if the military authorized him to post a video detailing his work with explosives as a government engineer.

Stortstrom also discussed his work with the military’s M-106 “bursting grenade” that fills the air with a “titanium dioxide cloud” after being thrown to provide concealment in “a sniper-defense scenario.”

In reporting on the investigation of Stortstrom, OPP posted a follow-up story with the heading:  “If you hang around with the likes of white supremacists like Matthew Heimbach and the American Renaissance crowd, you are going to raise flags if you are also working for the military! That's just the way it goes.”