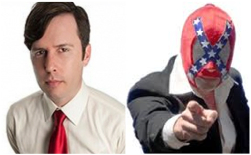 On Sunday, Jack Hunter, a close aide to U.S. Sen. Rand Paul, announced he had resigned from the Kentucky Republican’s Washington staff after a storm of controversy erupted July 9 surrounding Hunter’s past neo-Confederate statements and views, such as toasting the birthday every year of President Lincoln’s assassin, John Wilkes Booth.

The resignation came despite Paul’s outspoken defense of his aide, in which the senator claimed that there was “no evidence” that Hunter had exhibited any bigoted beliefs or behavior.

As a right-wing columnist and radio pundit in his native South Carolina, Hunter would often don a mask resembling a Confederate flag during public appearances and billed himself the “Southern Avenger.”

While in his 20s, the now 39-year-old Hunter was a chairman in the League of the South, labeled a neo-Confederate hate group by the Southern Poverty Law Center.

But in an E-mail Sunday to The Daily Caller News Foundation announcing his resignation, Hunter said he had adopted “a more tolerant worldview.”

“I’ve long been a conservative, and years ago, a much more politically incorrect (and campy) one,” he wrote. “But there’s a significant difference between being a politically incorrect and racist. I’ve also become far more libertarian over the years, a philosophy that encourages a more tolerant worldview, through the lens of which I now look back on some of my older comments with embarrassment.”

Hunter told The Daily Caller, a right-wing website run by one-time TV pundit Tucker Carlson, that he resigned to avoid being a distraction for Paul “and to clear his own name, which he argues is now unfairly associated with racism.”

He also wants to resume his career as a pundit – without the mask or the moniker.

The firestorm was ignited by a conservative online news journal, The Washington Free Beacon, which wrote a long story about Hunter’s neo-Confederate beliefs, including supporting secession. The story was called “Rebel Yell.”

The revelations of Hunter’s past and the reaction to it prompted some soul searching on the radical right. Michael Hill, the increasingly militant head of the League of the South, reached the conclusion that there’s “no place in the GOP for Southerners who wish to remain … Southerners.”

“Just so there’s no chance you’ll confuse The League with the GOP or any other ‘conservative’ group,” Hill said in a statement quoted on the white nationalist Occidental Dissent website, “here’s what we stand for: The survival, well being, and independence of the Southern people. And by ‘the Southern people,’ we mean White Southerners who are not afraid to stand for the people of their race and religion.”

A few days before Hunter announced his resignation, Michael Gerson, a columnist for The Washington Post and the former chief speechwriter for President George W. Bush, blasted both Hunter and his boss Rand Paul for defending Hunter.

The headline on the July 18 column was, “Rand Paul can never be a mainstream Republican.”

“Rand Paul has fallen spectacularly off the tightrope,” Gerson wrote, adding that Hunter’s past views and words were not just “youth and stuff,” as Paul put it, but “a decade spent mainlining moonlight and magnolias in the ruins of Tara.”

“What does this mean for the GOP?” Gerson wrote. “It is a reminder that, however reassuring his manner, it is impossible for Rand Paul to join the Republican mainstream. The triumph of his ideas and movement would fundamentally shift the mainstream and demolish a century and a half of Republican political history.”