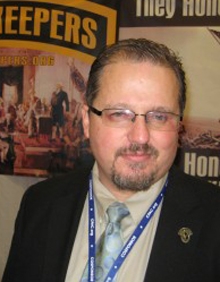 Oath Keepers founder Stewart Rhodes has always trusted his intellectual pedigree to keep him above the fray.

Boasting a Yale Law School degree and a smooth-talking manner, Rhodes from the start described the group he formed in 2009 — made up largely of law enforcement officials and past and present members of the military — as merely standing up for the Constitution and American liberties. When he urged his members to resist orders to impose martial law or create detention camps, he said, his were merely theoretical worries. After all, he said, Hessian mercenaries once did help the British during the American Revolution and Japanese Americans were rounded up and detained in internment camps during World War II.

He was no conspiracy theorist.

But nearly four years later, if there were any questions still remaining about what the Oath Keepers really are, an event the group has planned for this weekend should lay them all to rest. Starting on Friday at the Farragut State Park outside Coeur d’Alene, Idaho, the Oath Keepers are hosting the Northwest Patriots and Self Reliance Rally. The lineup of participating allies is revealing.

There will be a workshop on colloidal silver — a substance that many on the radical right believe is a cure for all kinds of ailments that the government has kept secret from the people. In fact, the substance has no known medical use and, if used with the frequency that some radicals do, turns human skin blue.

There will be seminars on Agenda 21, a United Nations sustainability plan that has no legal enforcement mechanisms or requirements, but that the radical right is convinced is a secret plot to impose socialism on the United States.

There will be representatives from the John Birch Society — a primary proponent of the Agenda 21 conspiracy theory, the idea that fluoridation of water is a Communist plot, and the charge that President Dwight D. Eisenhower was a Communist agent. Also scheduled to attend are Sheriff Richard Mack, a long-time darling of the antigovernment “Patriot” movement who has been encouraging county sheriffs to resist federal gun laws, and Chuck Baldwin, a far-right pastor and “constitutionalist” who moved to Montana several years ago to battle the incursions of the federal government.

Also featured will be training sessions on hand-to hand combat, nighttime military patrols, survival firearms, and preparation of “bug-out bags” — all of these an obvious reflection of the radical right’s obsessive fear that the government is about to move against the American people, seizing their guns and ending liberty.

“If you’re concerned about the future of America, if you’ve awakened to the peril facing our American heritage, our Judeo Christian way of life and the very existence of our future as a nation, if you realize the importance of preparing for an uncertain future and striving for a self-sufficient lifestyle, then there will only be one place to be,” a promotional radio advertisement about the rally says.

These kind of end-of-freedom fears are not new. So-called “preparedness expos” were common during the first wave of the antigovernment “Patriot” movement during the 1990s. Toward the end of that decade, with many on the far right predicting a “Y2K” crash at the millennial date change, tens of thousands of those on the right rushed to the expos to prepare for imminent hard times.

All this seems to obviously fly in the face of Rhodes’ assertion that he is no conspiracy theorist of wild-eyed radical. But, in fact, almost since the beginning, the Oath Keepers struggled to explain away the extremism in their ranks.

Last year, Rhodes and others raced to distance themselves from Charles Dyer, a former Marine and self-described Oath Keeper who led police on a cross-country chase amid allegations he raped his 7-year-old daughter. Although many Oath Keepers claimed Dyer was the victim of a government conspiracy to silence Patriots, he was later convicted.

In 2011, hundreds of armed Oath Keepers descended on the tiny town of Quartzsite, Ariz., to weigh in on a fight between the town’s elected officials, arguing, in effect, that the tiny, desert outpost was the first battle in the fight against the much-feared, socialistic “New World Order.”

Most recently, Mark Kessler, a self-described Oath Keeper and police chief in tiny Gilberton, Penn., formed a paramilitary militia group called the Constitutional Security Force to fight against proposed gun control legislation. Few knew of it until this week, when Kessler posted a profanity-laced video online that got wide attention. “F--- all you lib-tards out there,” a heavily armed Kessler says in the video. “As a matter of fact, read my shirt,” he says, turning around to show the camera a T-shirt printed with the words, “Liberals take it in the ass.”

Rhodes has shown his paranoia about a coming dictatorship, or loss of freedom, before. Two years ago, he moved to Montana to be part of an “American Redoubt” to make a kind of last-ditch defense of the Constitution. Now, with his latest set of friends in Idaho, he seems to have gone even further to the extreme right.