Jeremy Moody, a member of a small but violent racist skinhead gang called Crew 41, shocked South Carolina authorities last week when he told them that he and his wife shot and stabbed to death a middle-aged couple July 21 because the man was a registered sex offender.

But if ridding the world of sex offenders was Moody’s goal, he didn’t have to go outside of his crew to find one.

The head of the gang’s Colorado chapter, Archie Glen Ware Jr., is a registered sex offender, convicted of “accosting for immoral purposes.”

Indeed, the criminal resumés of the members of Crew 41 are long and violent and include charges of attempted murder; witness intimidation, armed robbery, aggravated assault and most recently double homicide.

The same day of the double homicide in South Carolina, 1,200 miles away near Kearney, Neb., Jonathan Schmidt, the founder of Crew 41, was arrested and charged with aggravated assault in a brutal attack July 20 that left a man with a fractured skull.

A few days after the assault, Schmidt, known as “Monster,” lamented his and his crew’s fate. He wrote on VK, a European version of Facebook, “I am out on bail facing 50 years in prison. And our South Carolina chapter has been picked up on murder charges. Having a hard first year but hopefully things turn around for us.”

After the crew's sergeant-at-arms, Ryan Hesse, was arrested in 2001 on a warrant for investigation of attempted murder, Salt Lake County (Utah) sheriff's deputies discovered two explosive devices in his briefcase. The Salt Lake County Sheriff's complex had to be evacuated. 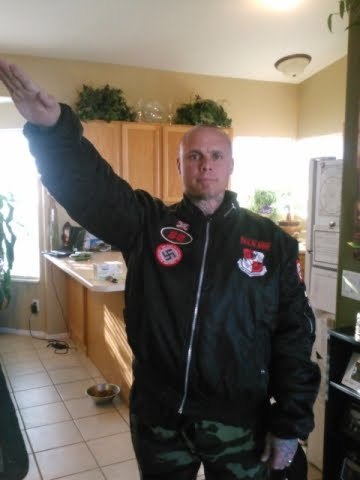 Another member of the crew, Tyler Palson, 24, was charged last year, according to local news accounts, with making terroristic threats, harassment and stalking after threating to burn down a house and murder the family living there in central Pennsylvania.

Moody, 30, and his wife, Christine, 36, appear to make up the entire South Carolina chapter of Crew 41. On her Facebook page, Christine Moody thanked the gang for accepting their membership: “Special thanks to Crew 41 for welcoming Jeremy & I with such open arms. May the 14 words live on forever 841!!!” [The “14 Words” are a famous white supremacist catchphrase, “We must secure the existence of our people and a future for White children.” The 41 in neo-Nazi code stands for the fourth and first letters of the alphabet, D and A, which stands for the other name for Crew 41, Die Auserwählten, German meaning “the chosen few.” The 8 before the 41 stands for H, which presumably means “Heil,” as in Heil Die Auserwählten.”]

Christine Moody, who calls herself “a veteran skinbyrd,” was also apparently trying to recruit more members in South Carolina. “Looks like I may have a good potential prospect,” she wrote on Facebook. “Things are looking up. 841!!!

Union County Sheriff David H. Taylor said that Christine Moody was tight-lipped when first arrested but in recent days has been talking a lot “because she’s pissed off she’s not getting as much attention” as her husband.

"She wants to get the glory,” Taylor said.

“He shot both of them and she stabbed both of them,” Taylor said. “She cut the woman’s throat.

Taylor said the Moodys told investigators they planned to travel to Nebraska in late August for Crew 41’s now-cancelled first meet and greet. “Anybody with any association with this bunch,” the sheriff said, “is trying to dump them like a bad cold.”

The Moodys have been charged with killing Charles Parker, 59, a registered sex offender and his wife, Gretchen Parker, 51, on Sunday, July 21, in their home in Union County South, Carolina. Moody told investigators that he picked Charles Parker out from a sex offender registry. The head of the gang’s Colorado chapter is on a similar registry.

As for why Parker’s wife was killed, Taylor said that Moody explained, “She was a casualty of war.”

Beyond its violent membership, what is unusual about Crew 41 is the way and speed in which it came into existence and started spilling blood.

Crew 41 was essentially created online. Few, if any of the gang members, have actually met face-to-face. The crew was scheduled to hold a meet and greet in a small town in Nebraska where Schmidt, the founder, lives. But the gathering was recently cancelled.

Schmidt began the gang on Jan. 28, three days after resigning his post as “National Director” of the Aryan Terror Brigade (ATB).

Schmidt resigned from ATB under a cloud of suspicion. Schmidt was accused online of being a police informant.

“So apparently people are saying I am a confidential informant,” Schmidt wrote on his VK page on Feb. 8. “It makes me laugh and at the same time it makes me sick. Better have something in your hand before my name ever leaves your mouth. I live in Pleasanton, Nebraska and I am not real hard to find if you have something to say to me.”

Schmidt is heavily tattooed from his arms to his torso to most of his 28-year-old face. There’s a large swastika in the middle of his chest and “Ladies Loves” above that and runes, or medieval Germanic letters, on his left eyebrow that spell out “Hate.”

“People who are Rocking patches or call themselves white nationalists…but not doing ANYTHING to actually further their race are really just waisting [sic] time and really making the movement look terrible,” Schmidt wrote on VK on May 30. “So lets just say this…either start living the 14/88/9 [88 stands for “Heil Hitler”] or just get the f--- out and go join the punk scene or something…iam [sic] not against old school skinhead tradition or any of it but there is a difference…a lot of guys say they are white nationalist but have never done anything to help move our race forward.”

No one can say that Crew 41 hasn’t been busy.