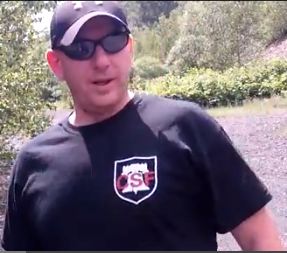 The police chief of a tiny borough in Pennsylvania’s coal country, who also heads a militia formed to oppose any new federal gun control measures, has been suspended for 30 days after he posted a series of profanity-laced videos to YouTube in which he angrily fires several automatic weapons and uses the word  “libtards” in reference to liberals.

The Gilberton Borough Council voted 5-1 during an executive session last night to suspend Mark Kessler, saying he did not have permission to use the weapons he fired in the videos, The Patriot-News reported. The council did not suspend him because of the content of his videos. “It was just the misuse of borough property,” Gilberton Mayor Mary Lou Hannon said.

The videos Kessler posted to YouTube are filled with angry antigovernment rants that became something of an Internet sensation. In one, he talks about conspiracy theories involving the United Nations and U.S. Secretary of State John Kerry. In another, Kessler offers basic firearms lessons, using a target of a clown he says represents Democratic House Minority Leader Nancy Pelosi.

Kessler came to the attention of Hatewatch earlier this year when he drafted the “2nd Amendment Preservation Resolution,” a proposed ordinance that would require his borough to “enact any and all measures as may be necessary” to protect the Second Amendment. Several months later, Kessler formed the Constitution Protection Force – a militia that garnered widespread support from many in the antigovernment “Patriot” movement.

In the aftermath of his recent videos, however, those who were once his biggest supporters have sought to distance themselves from Kessler’s incendiary rhetoric.

Former Arizona Sheriff Richard Mack’s Constitutional Sheriffs and Peace Officers Association (CSPOA) removed Kessler from its list of law enforcement officers who have vowed to resist the federal government’s efforts to enact new gun restrictions. Mack on Thursday told Hatewatch that he has reached out to Kessler to encourage him to tone down his rhetoric. “I don’t think the founding fathers would be acting like that,” Mack said, adding, “I’ve been taken aback by all this stuff he’s been doing. ... I didn’t want him to get fired. But man, oh man.”

Kessler’s future remains to be seen. On Thursday, he posted a notice online stating that borough officials plan to fire him during his suspension. He did not return telephone messages left by Hatewatch seeking comment, nor did Mayor Hannon. Earlier this week, however, Hannon told the AP that “the profanity and violence in [Kessler’s videos] was upsetting.” She said nothing of his future employment, except that Kessler had been a “loyal” public servant.