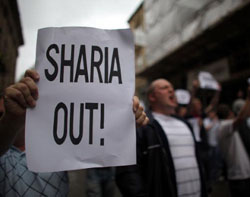 A federal judge in Oklahoma last week ruled that a voter-approved constitutional amendment, meant to prevent the imposition of Islamic religious law in the state’s courts, violated the U.S. constitution’s guarantee of freedom of religion.

Chief District Judge Vicki Miles LaGrange said Thursday that the state’s Save Our State Amendment, passed by referendum in 2010 after a huge propaganda campaign by its backers, failed to identify or address an “actual problem” in the legal system. Opponents, including numerous legal commentators, have said for years that the anti-Shariah law was utterly unnecessary because the Constitution would not allow the imposition of foreign law. But after Oklahoma approved its referendum, Arizona, Kansas, Louisiana, North Dakota, South Dakota and Tennessee still passed similar measures.

Most, including the Oklahoma referendum, were based on model legislation — the so-called “American Laws for American Courts” proposal — drawn up by the American Freedom Law Center (AFLC), a religious-right law firm formed by Robert Muise of the Thomas More Law Center, and David Yerushalmi, a virulently anti-Muslim lawyer and founding father of the anti-Shariah movement. Yerushalmi has said that the “War on Terror” should be a war on Islam “and all the Muslim faithful,” and once proposed to outlaw Islam and deport all Muslims.

The state’s constitutional amendment never went into effect because the courts stayed it pending the resolution of outstanding legal challenges. It was contested by Muneer Awad, the former Oklahoma state director of the Council on American-Islamic Relations (CAIR), a Muslim-American advocacy group.

According to the AFLC’s website, the American Laws for American Courts model legislation “was crafted to protect American citizens’ constitutional rights against the infiltration and incursion of foreign laws and foreign legal doctrines, especially Islamic Shariah law.” The site claims that “increasingly, foreign laws and legal doctrines, including Shariah law principles, are finding their way into U.S. court cases.” But in fact Shariah law has only been used in private civil law contracts between individuals who agree to be bound by its tenets in advance — and not, in any case, in criminal matters, which are governed by the Constitution.

In such matters — for instance, in a private sales or marriage contract — the parties may agree to be bound under Shariah law, but not if it conflicts with American criminal law (a man, for instance, could not legally beat his wife even if the couple had earlier agreed to be governed by Shariah marriage law). Robert K. Vischer, a law professor at the University of St. Thomas law school in Minneapolis, said as much in an essay posted to First Things, a non-partisan and non-denominational website devoted to advancing “religiously informed public philosophy.”

“Before Christian and Jewish believers support such measures,” he wrote, “they should consider the way these laws not only misunderstand the faith of the Muslim fellow citizens but threaten their own religious liberty. Muslim Americans who seek to use Sharia are not asking the American legal system to adopt Islamic rules of conduct, penal or otherwise. Muslims have introduced Sharia in court not in an attempt to establish a freestanding source of law binding on litigants but rather in recognition of the norms to which the litigants have already agreed to be bound.”

“American courts do this every day—it’s called contract law,” Vischer continued. “Even the literature being pumped out by anti-Sharia organizations show that their target is not the threat posed by the imposition of Sharia on American society but rather the threat posed by the introduction of Sharia according to the same criteria of admissibility applied by courts to other religious codes.”

Backers of the Save Our State Amendment, which Oklahoma voters passed with a 70% margin, were unable when challenged in a preliminary hearing to produce a single instance when Shariah law had been applied by an Oklahoma court. In her ruling, Judge LaGrange also found that public debate, public discussions, articles, radio ads, and robocalls promoting passage of the amendment led voters to believe that that it was actually a referendum on the advisability of Shariah law.