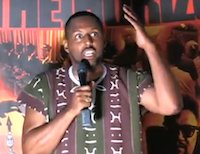 By day, Ayo Kimathi works for the Department of Homeland Security (DHS) as a small business specialist in a unit that buys such items as handcuffs, ammunition and guns.

Off-duty, he calls himself “the Irritated Genie.” He’s a gay-bashing, revenge-seeking black nationalist who advocates on his website – War on the Horizon – the mass murder of whites and the “ethnic cleansing” of “black-skinned Uncle Tom race traitors.”

“Warfare is eminent,” the website declares, “and in order for Black people to survive the 21st century, we are going to have to kill a lot of whites – more than our Christian hearts can possibly count.”

A former supervisor of Kimathi’s at the DHS told Hatewatch, “Everybody in the office is afraid of him.”

“This guy is filled with hate,” the supervisor continued. “People are afraid he will come in with a gun someday and go postal. I am astounded, he’s employed by the federal government, let alone Homeland Security.”

When reached by telephone today and asked by Hatewatch if he is the Irritated Genie, Kimathi hung up. The night before, a woman answered the phone at his website, known as WOH, and refused to say whether the Irritated Genie is Ayo Kimathi.

“He just goes by the Irritated Genie,” she said, promising to pass along an interview request.

The website has designated August as “Nat Turner Month” in honor of the slave who led a bloody rebellion in Virginia in 1831. One of the ways in which WOH recommends Nat Turner be celebrated is for black people to “Plan every act of  vengeance, retaliation, protest, aggression, etc. … for the month of August knowing that the ancestors, and especially Prophet Nat, Boukman Dutty, and Jean-Jacques Dessalines, will be with you as you do your hunting.”

Kimathi’s former supervisor discovered Kimathi’s hateful Internet presence in mid-June. “When I saw the website, I was stunned,” she said. “To see the hate, to know that he is a federal employee, it bothered me".

Kimathi works for U.S. Immigration and Customs Enforcement (ICE), a division of Homeland Security. Because it is a law enforcement agency, the supervisor said, employees are required to obtain official permission in writing for any outside activities, such as working a second job at McDonalds, running the bingo game at church, or volunteering at the Red Cross.

Kimathi obtained official permission but only by misrepresenting the true nature of his endeavor. He told management that it was an entertainment website selling videos of concerts and lectures. He called it simply WOH, never saying that WOH stood for War on the Horizon.

“If he had adequately and truthfully described his group,” the supervisor said, “I can’t imagine for a minute he would have been granted permission.”

Kimathi also spreads his message of pending race war and genocide and his disgust with “the smallhates (white so-called ‘jews’) and the white homos like Gay Edgar Hoover” in a series of videos and speeches he gives around the country.

The enemies’ list on WOH rivals that of President Richard Nixon’s in terms of length. It includes, among others, Rev. Al Sharpton, Lil Wayne, Oprah Winfrey, Whoopi Goldberg, Condoleezza Rice, Colin Powell, who he calls “Colon,” and even President Obama, “a treasonous mulatto scum dweller … who will fight against reparations for Black people in amerikkka, but in favor of f-- rights for freaks in amerikkka and Afrika.”

Kimathi’s former supervisor said among his duties at DHS and ICE is speaking at various vendor events. He’s one of the agency’s public faces. It is his job to advocate for small business owners “white, black, historically disadvantaged, disabled veteran-owned, everybody,” the supervisor said.

“He fights for the little guy,” the supervisor said. “And he’s very good at it. He has a commanding presence. He’s very suave. It’s almost as if he has a split personality.”

The homepage of WOH says the organization was created “for the purpose of preparing Black people worldwide for an unavoidable, inevitable clash with the white race. whites [sic] around the world are absolutely determined to exterminate Afrikan people in all corners of the Earth.

“As a result of this reality, WOH has dedicated our time and expertise to properly educating Black people to prepare for Racial Warfare. This includes intellectual, spiritual, psychological, and physical preparation for a global clash that will mean the end of white rule on this planet or the end of the Black Race as we know it.

“Please review the information on our site to understand the threat our people are facing so that you may make the right decisions in preparation for this reality.

“We’ll See You on the Battlefield!”