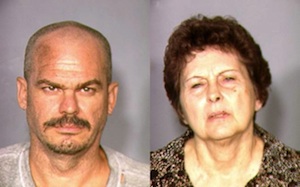 Las Vegas authorities may be looking for additional suspects, likely members of the antigovernment  “sovereign citizens” movement, after the arrest this week of a couple allegedly planning to kidnap, jail, torture and kill police officers.

Police describe both as being “sovereign citizens".

“Blood or no blood – it doesn’t matter,” Brutsche told an undercover officer in July, according to the arrest report, the Las Vegas Sun reported Thursday. “I will kill anyone that tries to stop the cause of liberty,” Brutsche is quoted as saying in the police reports, adding,  “I have no qualms about it.”

Police said Brutsche, a six-time convicted felon and registered sex offender in California, was “committed to” the sovereign citizen movement, considered by the FBI to be a “domestic terrorist movement.”

The arrests came after a four-month investigation during which the couple “hosted a sovereign citizen ideology class where they attempted to recruit members,’’ according to the arrest report, the Review-Journal newspaper reported. Unbeknownst to the suspects, those attending the indoctrination class included undercover detectives who posed as sympathizers and ultimately had more than 30 meetings with the couple, recording hundreds of hours of conversations detailing the plot, according to the police report.

The arrests were made after the couple, given access to an unoccupied house by one of the undercover detectives, took the plot to the next step earlier this month by starting to build a crude jail cell in the house just a few blocks off the Las Vegas Strip. Police said they planned to randomly encounter an officer during a traffic stop, abduct him or her at gunpoint, and take the officer to the house. There, they intended to conduct a bogus “common law” court trial before executing the officer, using acid and plastic bags to dispose of the body.

The couple discussed following patrol cars and making video recordings. The report said if an officer attempted to make an arrest, the sovereign citizens would “kill the cop” if necessary, the report said. Newman reportedly told one undercover detective she would create a code-word list if they thought their telephones were tapped by government investigators.

Police said the couple hoped the publicity from their first abduction and execution would build toward more kidnappings and killings of officers.

Sovereign citizens are known for their frequent run-ins with police, often because they have invalid driver’s licenses or vehicle registrations – or just simply believe the government has no control over them.

Seven law enforcement officers in the United States have been killed since 2000 by sovereign citizens, and police contact with the anti-government extremists seems to be increasing.

In May 2010, two West Memphis, Ark., officers were killed by Jerry and Joe Kane, a father-son team of sovereigns, during a traffic stop. Both were killed in a subsequent shoot-out that left two more officers badly wounded.

“This latest plot shows that sovereign citizens remain a deadly threat to law enforcement officers across the country,” said former West Memphis Police Chief Bob Paudert, whose son was one of the two officers killed by the Kanes. “All officers need to be aware of this threat and know how to recognize the signs that they are dealing with a sovereign, particularly during traffic stops. That’s why, shortly after the deaths of my son and his partner, I made an officer training video on this subject with the Southern Poverty Law Center.”

That video, which has been shipped free of charge by the SPLC to more than 100,000 law enforcement officers, can be viewed here.

A year ago this month, two sovereigns were responsible for fatally shooting two sheriff’s deputies and the wounding of two others near New Orleans. In March of this year, a sovereign citizen in Navarre, Fla., who was accused of printing his own currency, was killed during a shoot-out with police following an altercation that began with a traffic stop. In October 2012, in Memphis, Tenn., a woman claiming to be a sovereign citizen was arrested after she refused to exit her vehicle during a traffic stop and drove away, hitting two Memphis officers in the process.