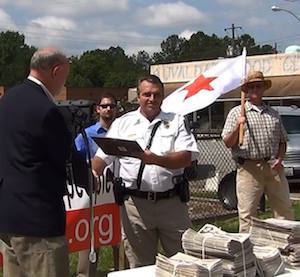 Flying the Georgia Secession flag and the Southern Nationalist Activism flag, about 50 demonstrators took to the streets of tiny Uvalda, Ga., this past Saturday to protest the presence of Latino immigrants who they blamed for “Southern demographic displacement.”

The rally, sponsored by the neo-Confederate League of the South, was notable for the lack of overt racism as the organizers, including a man who once belonged to a leading neo-Nazi organization, sought to present a mainstream, non-threatening image.

The demonstrators – who were subject to a strict dress code forbidding Civil War regalia, inflammatory belt buckles and hats, and requiring tucked-in, button-down shirts – smiled and waved to local traffic for several hours in the morning before continuing their protest in nearby Vidalia.

Despite the veneer of moderation, the underlying message was clear: This land belongs to white people.

Speeches by League members focused on Southern identity, the “ownership” of the Southeast by white Southerners, and familiar political paranoia about state and federal government. League President Michael Hill, who declared, “God has made you who you are, and you have every right to stand up proudly and proclaim it,” used his address to reinforce a fear of minority status for whites.

“If you bring a new population who doesn’t speak your language, who doesn’t have your customs and traditions, who doesn’t respect you as owners of this place, it’s going to change and you are going to be a minority in a place your ancestors built. And that is not going to be a good situation. I can guarantee you. I have seen it firsthand. That’s why we’re here.”

Noticeably absent were local residents of Uvalda who are supposedly threatened by immigrants, many of whom work on area farms. But one local was standing with the League and its supporters: Police Chief Lewis Smith.

Last week, Smith’s support for the rally appeared to waver after being told by Hatewatch that one of the organizers was Michael Cushman, a former member of the neo-Nazi National Alliance, and that one of the scheduled speakers, Michael Tubbs, served four years in prison for stockpiling stolen military weapons with the intent of targeting “enemies of his race.”

But on Saturday, Smith was mingling casually with the rally participants and bringing them coffee and donuts. Then, Michael Hill presented him with the “Robert E. Lee Award for Duty.” The chief said nothing while accepting the award but later shook hands with many of the  participants.

Tubbs, of the Florida chapter, comforted those in attendance by announcing he had brought chest shields, QuickClot Combat Gauze, and other supplies to treat traumatic wounds. No such emergency medical supplies were needed.

League members and supporters from across the Southeast, and as far away as Peoria, Ill., came to the town of about 500 people, populating the four corners of Uvalda’s one main intersection and holding signs that read, “It’s wrong to replace us” and “Mayor Bridges wants to replace us.

Their ire was aimed at Bridges because he is one of the plaintiffs in a federal lawsuit filed by the Southern Poverty Law Center (publisher of Hatewatch) that resulted in the federal courts striking down key provisions of Georgia’s harsh anti-immigrant law.

Ed Wolfe, head of the League’s Georgia chapter, spoke about elected officials’ failure to represent their Southern constituents. “They are not doing their job. They are not stopping the invasion of our country and my state, Georgia. That’s what I consider my country.”

Wolfe encouraged attendants to “go up to north Georgia to those little mill towns … see if you speak the language. You don’t. These people took the jobs, took the farms, all the resources on the farms, and they’re taking over.”

Bradley Dean Griffin, who runs the racist blog Occidental Dissent, took to his website during and after the protest to decry those Southerners who are simply “bickering, time-wasting, navel-gazers so commonly found on the internet.”

According to Griffin, one of the objectives of the rally was to show “our many sympathizers that the league is full of normal, ordinary White Southerners.” He suggested that Murfreesboro and Shelbyville, Tenn., will be the next site, for League rallies – this time to fight “Muslim colonization.”