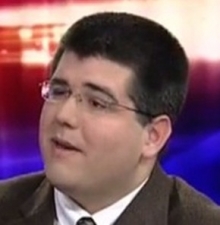 A little over a year ago, Matthew Heimbach was annoying fellow students at Towson University with juvenile stunts like chalking “White Pride” and “White Guilt is Over” on sidewalks of the Maryland campus.

But in the last few months, since graduating at the end of the spring semester, Heimbach has been turning into a full-fledged neo-Nazi. No longer content with softer groups like the White Student Union that he started at Towson, Heimbach now rails about “conniving Jews,” goes on talk shows like that hosted by neo-Nazi David Duke, approvingly quotes terrorist assassin David Lane, wears a pistol when addressing a leading racist group, and calls for violent revolution.

“Revolution is the only answer to our plight,” Heimbach wrote in a post today on the Traditionalist Youth Network (TYN), an umbrella group he formed this spring with Indiana native Matthew Parrot and which now includes the White Student Union. “Our ancestors fought against the scabs, bosses, capitalists and Jews to make a better future for their children. Now we must do the same.”

In the same post, Heimbach said that “the Left has spent generations attempting to ‘help’ the worker by dancing to the tune of the Jewish elites.” Like Christ, he said, “we must … drive out the moneylenders and traitors in our midst.”

In an August post on the same site, Heimbach openly acknowledged a long-time interest in national socialism, fascism and white pride movements. He credited the Stormfront website, run by former Alabama Klan leader Don Black, as “crucial” to his own development as an activist. “[T]he time is right, and Trad Youth is here to be the vanguard of the youth movement for our folk. … While victory is a long way away and will be paved with blood, sweat, tears, and martyrs, we truly now have a chance to not only restore our race and our Tradition, but to become triumphant.”

Last week, Heimbach also wrote that “we are looking to totally overturn this system. Traditionalists are willing to die for our Cause and our people.” He went on: “The total destruction of Western Christian civilization should be something to galvanize the masses against the pilfering capitalists, conniving Jews, and Third Worlders who want to swamp our nations. The people should be marching in the streets with torches and guns and a militant spirit, but … they aren’t.” Still, “Revolution and revival is coming comrades, we just have to keep up the pressure.”

Also last week, Heimbach went on the radio show hosted by David Duke, a former Klan leader and long-time neo-Nazi. Posting on Stormfront as “MarylandFalangist” (a Phalangist is a fascist), Heimbach described his appearance as “a huge honor” and said it focused, in part, on “the role of Jews in academia.”

Heimbach announced in May that his White Student Union, a reincarnation of another racist campus group led by him, would be merging with the TYN. After he graduated, he became executive director of the larger organization.

A month later, in June, Heimbach spoke to the Council of Conservative Citizens — a hate group that has referred to black people as a “retrograde species of humanity” — with a pistol strapped to his hip. He called for secession and quoted David Lane, who died in prison while serving a 190-year sentence for the assassination of Alan Berg, a Jewish talk show host who had criticized racist groups, in 1984. He cited Lane’s 14 Words, which have become a white supremacist catchphrase: “We must secure the existence of our people and a future for White children.”

Matt Parrott of the TYN has also been sounding more radical since taking up with Heimbach. Last week, Parrot wrote about TYN’s protest of a Bloomington, Ind., bookstore thought to be a “storied hub of Marxist agitation,” saying the shop “actively promotes terrorist violence.” To make the point more clearly, TYN carried picket signs to the store depicting the image of a hanging lynching victim. Parrott, an Indiana resident and former head of a Council of Conservative Citizens chapter, said in his post that “TradYouth is what the radical right has been waiting for, a complete synthesis of authentic street-fighting courage and Radical Traditionalist principles.” In a post about 10 days earlier, he said, “No more sitting back and watching America fall apart. There is a storm coming!”

As Heimbach and Parrott head further and further to the right, it may be that the only thing remaining to be seen is if they truly adopt “street fighting” and, like their Nazi mentors, storm into the street in order to physically attack their enemies.