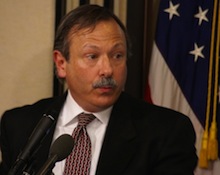 The Constitution Party, a small third party that has been around in one form or another since 1992, says its goal is “to limit the federal government to its delegated, enumerated, Constitutional functions.” As a practical matter, that has meant that it opposes abortion and most immigration, seeks to drastically reduce government spending and end the income tax, and works toward a noninterventionist foreign policy that requires dropping out of international organizations and treaties.

What it has not done, despite serious flirtations with radical anti-abortionists and antigovernment militias, is get into open racism. Not until now, anyway.

Virtually unnoticed, Gemma, who lives in Florida, has recently joined the governing national executive committee of the Constitution Party as its eighth living member (party founder Howard Phillips, who died earlier this year, is also listed). Although Gemma is described by the party website as “a veteran political and fundraising consultant” who was a staffer on three presidential campaigns, he is in fact a white nationalist with deep ties to a whole array of racist hate groups.

For years, he was the head of design, marketing and advertising for the racist tabloid of the Council of Conservative Citizens (CCC) — a group that has complained that non-white immigration was turning the U.S. population into a “slimy brown mass of glop” and described black people as a “retrograde species of humanity.” He also was the media coordinator for the CCC’s Capital Region for several years.

He is part of the American Holocaust denial movement, reviewing a book by British denier David Irving for the racist Occidental Quarterly journal, organizing a 2005 speaking event for Irving, and giving a speech at the denialist Institute for Historical Review, according to the Institute for Research on Education & Human Rights.

In 2000, Gemma appeared with David Duke and Don Black, both former leaders of the Knights of the Ku Klux Klan, at an event meant to raise money for the fascist, whites-only British National Party, according to the same report.

He has been media director at the National Policy Institute, a hate group that is staffed by leading racists and anti-Semites and whose founder worries that “the white race may go from master of the universe to an anthropological curiosity.” He still writes for The Social Contract, a racist anti-immigration journal. He has contributed to VDARE, a racist website named after Virginia Dare, said to be the first English child born in the New World. He is a member of Florida’s ResistNet Tea Party, where two veteran anti-Semitic activists — White Revolution founder Billy Roper and Internet radio host Clay Douglas — also found a home.

Gemma has also appeared as a guest on James Edwards’ racist, Memphis-based radio program, “The Political Cesspool,” later reviewing Edwards’ book for a white nationalist blog called Middle American News. And he has been on the other side of many interviews, speaking to such heroes of the radical right as nativist Sheriff Paul Babeu of Pinal County, Ariz., and former congressman Virgil Goode, who was the Constitution Party’s nominee for president of the United States in 2012.

Gemma’s influence on the Constitution Party has been, thus far, hard to gauge. The group’s mission statement and its website look unchanged. But it’s hard not to wonder, when an already radical group brings a longtime racist and anti-Semite like Peter Gemma into a key leadership position, just what the future can hold.