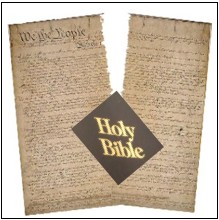 If you didn’t know it already, this is Constitution Week across the country. Smack dab in the middle in Ohio, the Daniel Cooper chapter of the Daughters of the American Revolution (DAR) wanted to do something special this year to commemorate the 226-year-old document. But what? The group wasn’t exactly sure. “I haven’t read the Constitution since high school, many decades ago,” chapter head Betsey Taylor told Hatewatch.

Probably most Americans could make the same confession, so the women of the Daniel Cooper chapter decided to take a 12-week Constitution course and invite everyone in their Dayton, Ohio-area community — from teenagers to grandparents — to join them. But it isn’t the traditional civics-class version of the Constitution course they hope to share. The class Daniel Cooper has signed up for and is promoting is a highly controversial lecture series offered by the far-right Institute on the Constitution (IOTC).

IOTC was founded by Michael Peroutka, a Maryland lawyer who sits on the board of the League of the South, a racist neo-Confederate group that advocates for a second Southern secession and a society dominated by “European Americans.” The league wants to form a “godly” nation, run by an “Anglo-Celtic” (read: white) elite that would establish a Christian theocratic state and politically dominate black people and other minorities. Peroutka was also the 2004 presidential candidate of the Constitution Party, a far-right, theocratic third party.

“Peroutka is emphatic that reform of the current nation is not the purpose of studying the current Constitution,” writes Warren Throckmorton, a psychology professor who studies and blogs extensively on public policy, mental health, sexual identity and religious issues and has been closely following IOTC’s attempts to plant its flag in Ohio. “He believes along with the League of the South that this ‘regime’ will collapse leading to secession or some other situation.”

A flyer announcing the lecture series promises “to introduce you to the Constitution of the United States of American, our Biblical heritage and limited government.”

“Beginning with the Bible,” the flyer continues, “you will learn the origins of law and government. Next, stories of America’s discovery, settlement and evangelization from exciting, primary sources you never saw in school!”

The series is scheduled to begin tonight at Grace Lutheran Church in West Carrollton, a 20-minute drive from Springboro, Ohio, where a revolt this past summer by parents and alumni forced the local school board to cancel the same 12-week program the DAR chapter is promoting and a one-day seminar offered by an outfit called the National Center for Constitutional Studies.

The Dayton Daily News reported on July 4 that the courses “embroiled the district in controversy over what opponents called a religious interpretation of the subject,” and that the groups offering the courses “have been criticized as ‘tea party leaning’ and religiously oriented.”

Before the parent upraising, the Springboro school board had planned to offer the courses during the summer to parents, students and staff. The board reportedly wanted to evaluate the courses for possible inclusion in its schools. In June, according to the Dayton Daily News, the ACLU of Ohio announced it “was investigating the board’s actions as part of an overall plan to push a religious agenda in the public school district.”

A month later, the board cancelled both courses.

Taylor, the regent, or head, of the Daniel Cooper DAR chapter, said she was not aware of the protests in nearby Springboro nor did she know about the connection IOTC has to the League of the South or what the League stands for. “Personally, I just love history,” Taylor said. “We’re not sponsoring the group. We’re sponsoring a class on the Constitution. If it gets to be political, our participation will stop.”

The regent said that as the chapter discussed ways to commemorate the Constitution this year, a member, Georgene Bonsteel, suggested the chapter, which has 109 members, sign up for the lecture series. Bonsteel, Taylor said, was one of several chapter members who had previously taken the course and recommended it. According to the IOTC website, more than 250 “students’’ in Ohio graduated from the course last year.

Bonsteel told Hatewatch that she did know about the parent protests in Springboro and the school board’s decision to cancel the courses. “I think it’s terrible,” she said, “that there are factions in this country that don’t believe in doing things correctly and erroneously accuse patriotic organizations of doing what is not right.”

Like Taylor, however, Bonsteel said she did not know anything about the League.

“Right now, they want to secede?” she asked.

The answer is yes.

Bonsteel said that would not change her mind about offering the course to her DAR sisters and anyone else.

“There is nothing that would keep me from being involved in this wonderful, Constitution information classes,” she said. “That’s all it is.”

In an interview with Hatewatch today, Throckmorton, a conservative evangelical who teaches at a Christian liberal arts college, said the IOTC connection to the League of the South should make “anyone run in the opposite direction.” The League, he said, “wants to take us back to before the Civil War.”

Throckmorton — who recently wrote an important book debunking theocratic claims about Thomas Jefferson and the foundation of the United States — said that while the course does provide some accurate information about the Constitution, much of it is distorted history and “pro-Confederate” propaganda. He said people who sign up for the course apparently believe they are getting hidden information, the inside scoop they were never told about in school.

“The reason they haven’t heard it before,” he said, “is because it just isn’t so.”