An estimated 400 people gathered in the tiny town of Leith, North Dakota, this past weekend to denounce white supremacist Craig Cobb’s plans to buy enough property and recruit enough fellow racists to take over the local government and establish an all-white enclave. 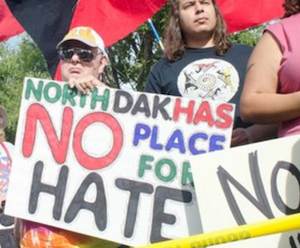 “We will be here again and again until you are gone. This is where we stop them. This is where it ends, in that crappy white house across the street,” one protestor, Scott German, screamed through a megaphone as he pointed to Cobb’s two-story white house on Leith’s Main Street.

The rally, planned by a group called UniteND, was scheduled to coincide with a visit from Jeff Schoep, commander of the National Socialist Movement (NSM), the nation’s largest neo-Nazi organization, to support Cobb’s plans. Schoep showed up with about a dozen NSM members, who planted Nazi flags on property purchased by Cobb.

In a letter addressed to Leith Mayor Ryan Schock before the visit, Schoep warned residents against standing up to the NSM and Cobb’s plans. “Craig Cobb will NOT be ousted from the community,” Schoep wrote. “Craig is not breaking any laws or ordinances, and has a right to reside in Leith just as any other American does. We are not asking you, or any other residents of Leith to change whatever political stands you may or may not have. If anything, you should see this for what it is, a chance at revitalizing a community, and a chance to be neighborly to your new neighbors, and vice versa.”

Cobb declined to comment on Monday when contacted by Hatewatch. A telephone message and an e-mail sent to Schoep seeking comment were not answered.

The NSM rally and the responding protest came as the town struggles to manage the national spotlight that has only grown since Hatewatch uncovered Cobb’s plan to buy up property in Leith, population 18. Cobb wants to build a “Pioneer Little Europe,” an idea long favored on the racist right as a way to escape what is seen as a multiculturalist agenda at work in larger and more diverse cities.

But in Leith, Cobb’s plans have led to concerted efforts to remove him from the town and curb the flood of racists suddenly interested in joining him.

Custer County health officials have condemned his ramshackle home because he has no running water. The town also has established a legal fund to help fight lawsuits that Cobb says he intends to file. He claims his civil rights have been violated. Town officials have even built a website to spread the word about what some have called a “crisis.”

“In the coming days, weeks and months we the citizens will endeavor to present a more realistic point of view as to our moral fiber and ties to the community,” a welcome message to the website www.leithnd.com says. “Although we welcome people to visit our tiny little community, it is, however, our community with a mayor and a council to decide how we live.”

With Leith raising money to defend itself and with the national energy the racist right has brought to the idea of an all-white community, the fight may just be beginning.